SAN DIEGO (AP) — While the Los Angeles Dodgers are regular participants in postseason baseball, there was something unusual about becoming the first team in the pandemic-shortened season to clinch a berth in the expanded playoffs.

“It’s different, I guess. I just found that out five minutes ago,” manager Dave Roberts said in his video news conference after the Dodgers beat the San Diego Padres 7-5 to take two of three in a matchup of the NL’s two top teams.

The Dodgers opened a 3 1/2-game lead in their quest for an eighth straight NL West title by beating the Padres for the second straight day. Dustin May threw 5 1/3 gutty innings out of the bullpen, AJ Pollock and Chris Taylor homered and Will Smith drove in three runs.

“I’m celebrating by saying I’m proud of our guys and it was a great series,” said Roberts, who grew up in northern San Diego County and both played for and was a coach with the Padres before getting the Dodgers’ job. “I think it caught us all by surprise because we were so focused on trying to win this series. I think word will travel once we get on the plane.”

San Diego, quieted by Dodgers pitching a second straight game even as it heads for its first playoff berth since winning the division in 2006, has lost two straight for the first time since mid-August.

May confirmed that as part of COVID-19 protocols, MLB doesn’t want teams having wild clubhouse celebrations after clinching.

Asked if the Dodgers had a celebration, he said:

But clinching a postseason spot “is something you grind for for the whole season,” he said. “This season is different but we had to grind in the quarantine zone, so you’re still going to feel super excited.”

At 35-15, the Dodgers breezed into the expanded 16-team postseason field. Los Angeles is seeking its first World Series title since 1988, having lost in the Fall Classic under Roberts in 2017 and 2018.

San Diego, quieted by Dodgers pitching a second straight game even as it heads for its first playoff berth since winning the division in 2006, has lost two straight for the first time since mid-August.

“Today we just got beat in almost all areas, facets of the game,” rookie manager Jayce Tingler said. “We didn’t play as clean as we have been defensively. Their guys over there on the mound, they’ve done a good job pitching, especially the past two days. It was nice to scrap and crawl and fight back in it, but at the end of the day we got into too big a hole to overcome.”

May, who had been scheduled to start before Roberts decided to go with a bullpen day, was the Dodgers’ third pitcher of the game. He went 5 1/3 innings and was in control until Jurickson Profar homered to right field with two outs in the seventh to pull the Padres to 7-3. Mitch Moreland reached on an error by second baseman Gavin Lux opening the inning.

After Profar’s homer, May struck out Trent Grisham and blew off some steam by yelling a few profanities that could be heard around empty Petco Park. Grisham angered the Dodgers by briefly posing at the plate after homering off Clayton Kershaw in the Padres’ 7-2 win Monday night.

May allowed Manny Machado’s solo homer with one out in the eighth, his 14th, and was lifted by Roberts.

Until the seventh, May had breezed through four innings by allowing only a single and a walk. He struck out six.

May said he felt his outing “was pretty solid. There were some miscues on my end that ended up going a pretty long ways. Just location-wise, it wasn’t where I wanted on those two pitches and they took advantage of it.”

Pedro Baez got the final two outs for his second save.

Pollock homered past the palm trees to the right of the batter’s eye in straightaway center field off rookie Adrian Morejon (2-1) with two outs in the second. It was his 11th. Taylor greeted Garrett Richards with a leadoff shot into the second deck in left -center leading off the sixth, his sixth, for a 7-1 lead.

San Diego’s Fernando Tatis Jr., who had been considered the NL MVP front-runner recently, went 0 for 4 to extend his slump to 2 for 27 over eight games. His average has dropped from .314 to .281.

“I don’t think he’s tired,” Tingler said. “I think last night he missed a homer by two or three feet, I thought he squared three balls up today. Unfortunately, they were right into the lanes they were playing. Just going through a little pocket, maybe trying to do too much at times. But I think he’s in position to get extremely hot for us down the stretch.”

Dodgers: Placed LHP Caleb Ferguson on the IL with what Roberts said was “a pretty good” tear in his UCL. Ferguson had an MRI in Los Angeles earlier Wednesday after facing just one batter Tuesday night. To take his roster spot, RHP Josh Sborz was recalled. …. Pollock came out late in the game with tightness in a hamstring.

Dodgers: LHP Julio Urías (3-0, 3.53) is scheduled to start the opener of a four-game series Thursday night at Colorado, which will counter with LHP Kyle Freeland (2-1, 3.54).

Padres: RHP Chris Paddack (3-4, 4.74) is scheduled to start Friday night in the opener of a three-game series at Seattle. 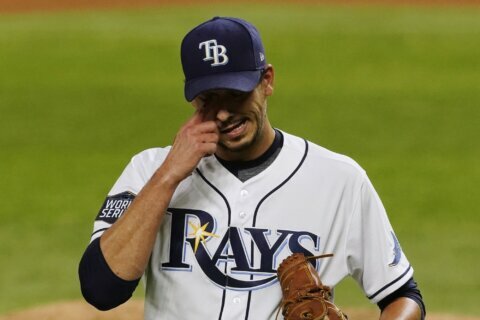 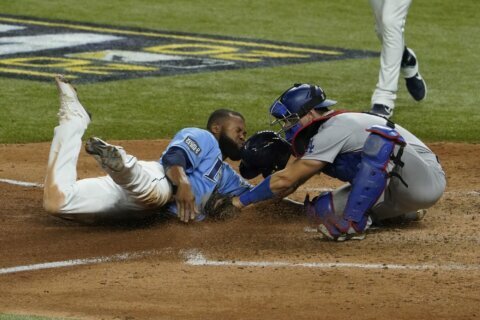