OAKLAND, Calif. (AP) — Dusty Baker waited for the Houston Astros to catch even a small break, and then his club finally got a few.

Yuli Gurriel hit a tiebreaking sacrifice fly in the seventh inning set up by an Oakland error, and the Astros beat the Athletics 5-4 Tuesday to split a doubleheader and end a six-game losing streak.

In the opener, as ash from nearby wildfires fell inside the Coliseum, Khris Davis homered off previously unbeaten Zack Greinke to help the Athletics win 4-2.

The split kept the AL West-leading A’s 4 1/2 games ahead of second-place Houston.

“It feels great. We’ve still got a chance to overtake these guys,” Baker said. “We need these next two games.”

Oakland loaded the bases against Enoli Paredes (2-2) in the sixth but couldn’t capitalize. Ryan Pressly earned his eighth save.

“It’s big. I think a lot of stuff hasn’t really gone our way on this trip and that’s a really, really good team over there,” Springer said.

J.B. Wendelken (1-1) got the loss as the typically reliable A’s bullpen couldn’t close it out.

Matt Olson hit a three-run homer for the A’s, the 100th of his career.

The A’s played as the visiting team in Game 1 for the makeup of a postponement from Aug. 30 after pitcher Daniel Mengden’s positive coronavirus test result. Oakland missed four games in all, including three in Seattle that forced the club to play three doubleheaders in a seven-day span that began Tuesday.

In the first game, Robbie Grossman hit a go-ahead double in the sixth and Ramón Laureano added an RBI single for Oakland.

Davis, the major league homer leader in 2018 with 48, snapped an 0-for-8 stretch playing for the first time since Aug. 26 at Texas. He began the day 3 for 8 lifetime against Greinke with a home run and a double.

“For a guy that’s a star like he is to not get the type of playing time, you would think he’d put some pressure on you,” A’s manager Bob Melvin said. “But he doesn’t. He does anything but. He’s as team-oriented of a guy that we have here.”

He seemed unconcerned about the Astros’ recent struggles.

Michael Brantley hit a two-run homer in the fifth for Houston. The Astros had their longest losing streak since dropping seven straight in June 2019.

New A’s lefty Mike Minor made his first start with Oakland in the second game after being acquired from Texas last week. He got into trouble in the fourth, when the Astros drew a pair of bases-loaded walks and scored on Carlos Correa’s hit by pitch.

Baker, who has homes in Northern California, said it was “very strange” traveling to Oakland amid the wildfires.

“I’ve been keeping up with it on TV and every time I look up there’s another fire,” Baker said. “Boy, the world’s in bad shape right now. I came off the plane here the first night and you could smell it, smell it in the air and your eyes are burning. … It looks like Mother Nature’s mad at us, the way we’re living, or not living, or whatever. I’m just hoping that this all changes here very quickly.”

Astros: Houston activated 3B Alex Bregman from the 10-day injured list. He wasn’t in the Game 2 lineup. Bregman batted second in the first game to try to get him as many at-bats as possible “to find his stroke.” He went 0 for 3, striking out twice with a walk. Bregman had been sidelined since Aug. 19 with a strained right hamstring he hurt that day at Colorado. … 2B Jose Altuve (sprained right knee) did some running as he resumed baseball activity. “He went out and ran today and he looked pretty good, he looked real good actually,” Baker said. … RHP Lance McCullers Jr., on the IL since Sunday with neck nerve irritation, underwent a procedure in Houston that alleviated much of the discomfort.

Athletics: SS Marcus Semien returned from a four-game absence with a left side injury to play the first game. … RF Stephen Piscotty was a late scratch for the opener because of left wrist soreness and also sat the nightcap. … 3B Matt Chapman hopes to do some baseball work Wednesday but doesn’t necessarily expect to return this series from right hip tendinitis that forced him out of Sunday’s series finale against San Diego. 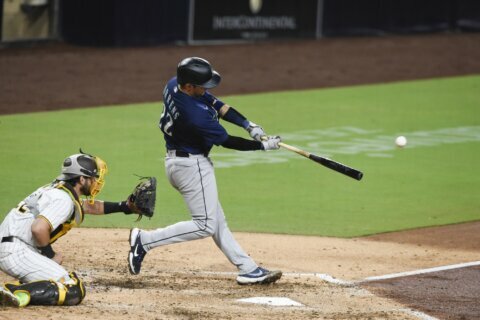 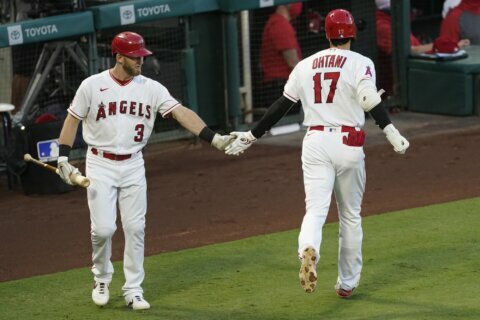 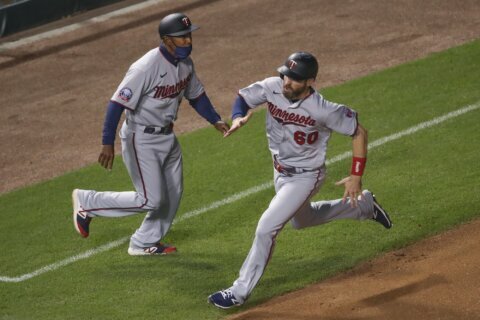