ATLANTA (AP) — The New York Yankees are having to sit out another day, this time because of the weather.…
Listen now to WTOP News WTOP.com | Alexa | Google Home | WTOP App | 103.5 FM

ATLANTA (AP) — The New York Yankees are having to sit out another day, this time because of the weather.

Rain in Atlanta forced a postponement of the Braves’ game against the Yankees, delaying the debut of Ian Anderson and the return of Aaron Judge and Ronald Acuña Jr. from the injured list.

The Yankees were eager to get back on the field after their three-game Subway Series against the New York Mets was postponed because of coronavirus concerns.

Now, the Yankees will have to wait until a Wednesday doubleheader at Truist Park, which would mean a six-day layoff since their last game against the Tampa Bay Rays.

Contrast that with what’s coming up: three doubleheaders over a five-day span.

“That’s 2020, baby,” New York manager Aaron Boone said. “We’ve got to figure it out. It’s a challenge. Obviously, these seven-inning (doubleheader) games makes it a little more doable, where it’s not as daunting, but there’s no question we’re heading into a tough stretch here.”

Anderson, the No. 3 overall pick in 2016 and the Braves’ top pitching prospect, was set to face New York ace Gerrit Cole (4-0) on Tuesday. Cole has a 20-game winning streak in the regular season, tied for the third-longest in baseball history.

But severe storms rolled through Atlanta throughout the day, and the forecast didn’t improve much as game time approached. Just before the scheduled first pitch, the game was called off.

A pair of seven-inning contests will be played Wednesday. Anderson is scheduled to face Cole in the opener, while Mahahiro Tanaka (0-1) goes against Braves ace Max Fried (4-0) in the nightcap.

The Braves called up the 22-year-old Anderson in hopes of bolstering a rotation that has struggled to find any consistency beyond Fried.

“He’s a kid who’s confident in his abilities,” manager Brian Snitker said. “He’s been throwing really well at the alternate site. He’s excited. Hopefully this is the beginning of a long big league career for this young man.”

Moving up to Triple-A Gwinnett late last season, Anderson struggled a bit in five starts. He went 1-2 with a 6.57 ERA, surrendering five homers in 24 2/3 innings.

Still, his arrival in Atlanta has been eagerly anticipated.

“I’m really excited to see what he’s got,” Fried said. “I know he’s going to bring it.”

Both teams bolstered their lineups by activating key players.

Judge has recovered from ailing right calf that sent him to the injured list. He is hitting .290 with nine homers and 20 RBIs in 17 games.

Acuña will return to the Braves after spending two weeks on the IL with an ailing wrist.

Atlanta also brought back Nick Markakis, who spent time on the injured list after potentially being exposed to COVID-19.

J..A. Happ didn’t come right out and say it, but the Yankees left-hander seemed to imply that the team is limiting his starts to avoid his $17 vesting option for 2021.

Happ has made three starts this season, going 1-1 with a 6.39 ERA in 12 2/3 innings. He’s not scheduled to pitch again until Saturday, which would be 13 days since his most recent appearance on Aug. 16.

When asked on a conference call Tuesday if he thought the Yankees were trying to manipulate his numbers, Happ told reporters, “I’ll let you guys answer that. I think it’s fairly clear.” 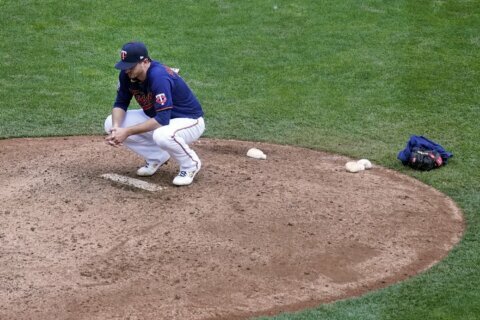 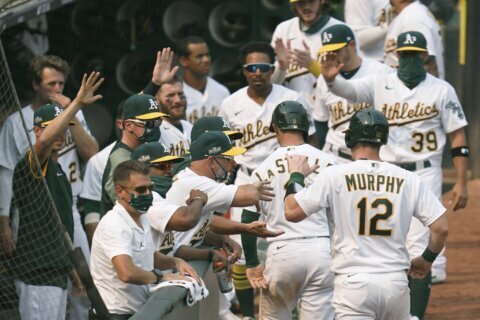