Cleveland’s starting rotation is rolling through the early stages of the season. The Houston Astros, on the other hand, are…
Listen now to WTOP News WTOP.com | Alexa | Google Home | WTOP App | 103.5 FM

Cleveland’s starting rotation is rolling through the early stages of the season.

The Houston Astros, on the other hand, are having to make do with a group that bears little resemblance to the one that pitched its way to the World Series last year.

Someone forgot to tell the Indians that starting pitchers might struggle early in this abbreviated campaign. The short training camp doesn’t seem to have affected this Cleveland rotation. In 10 games, the Indians’ starters have struck out 86 batters with only nine walks, going 5-3 with a 2.57 ERA.

Cleveland had a streak of seven straight starts by pitchers who went at least six innings with two runs or fewer. That was snapped Friday, but Shane Bieber looks like an ace so far, and Zach Plesac was outstanding in his first outing.

It wasn’t long ago that Houston was the team with a rotation everybody feared, but Gerrit Cole is with the New York Yankees now, and Justin Verlander has been out with a strained right forearm.

Zack Greinke is still with the Astros but has allowed five runs in nine innings over two starts. Josh James has walked 11 batters in six innings.

A first-round draft pick in 2016, Kyle Lewis made a brief debut last year, and now he looks ready to make an impact for the Seattle Mariners. The 25-year-old outfielder has hit safely in all 10 games this season, including three home runs. He had a streak of six straight multihit games in the middle of this run.

MORE OF THE SAME

As usual, Jacob deGrom looks impressive — as long as you look past the win column. The New York Mets’ ace — who was credited with just 21 wins over the past two seasons while winning the Cy Young Award both years — has allowed two runs in 11 innings and has yielded just four hits.

Albert Pujols of the Los Angeles Angels homered twice this week, bringing his career total to 658. Pujols has spent his whole career with the Angels and St. Louis Cardinals, which makes him a model of stability compared to some other players who have moved around more.

But who has the most home runs while spending his entire career with the same team?

Mookie Betts looks plenty comfortable with his new team. He’s hit a couple home runs already for the Los Angeles Dodgers, and on Friday night he made an incredible throw from the right field corner to catch Arizona’s Ketel Marte going to third.

The Chicago Cubs pulled off a triple play Wednesday night against Cincinnati. With the bases loaded, Kris Bryant dove to catch Shogo Akiyama’s line drive, then tagged third base and threw to first, doubling off both runners. But replays showed Bryant might have trapped the ball.

Tyler Alexander, a 26-year-old left-hander in his second season with the Detroit Tigers, posted this eye-popping line in a relief appearance Sunday against Cincinnati: 3 2/3 innings, no runs, no hits, one walk, one hit batter … and 10 strikeouts. Alexander struck out the first nine hitters he faced, falling one short of Tom Seaver’s big league record for consecutive strikeouts.

Mike Schmidt played all 18 of his seasons with the Philadelphia Phillies, and he hit 548 home runs. 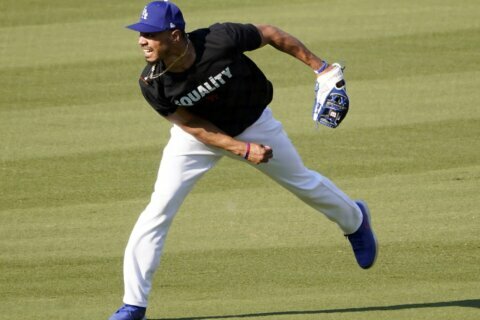 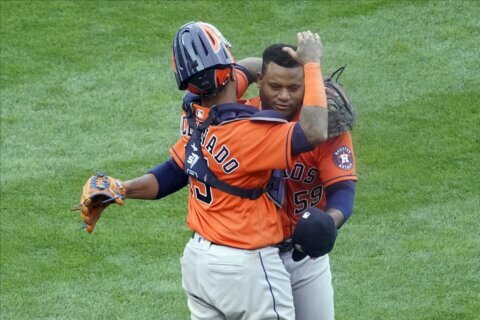