Rojas returns after being sidelined by Marlins’ outbreak

MIAMI (AP) — The Miami Marlins’ revolving roster is about to undergo another major makeover.

Shortstop Miguel Rojas became the first player sidelined by the team’s coronavirus outbreak to return when he was activated Thursday, and a wave of reinforcements is expected soon.

Rojas last played on July 26, when the virus spread so widely among the Marlins that their season was suspended for eight days. He was among 17 players placed on the injured list.

Partly because of the outbreak, the Marlins have made 71 roster moves since the season began July 24, and another flurry is coming. Right-hander Sixto Sánchez, the team’s top prospect, and outfield prospect Jesús Sánchez are expected to be called up to make their major league debuts this weekend.

Many of the other players on the injured list will likely be back soon as well — a welcome development for a team that has lost five games in a row. The players have been working out at the team’s spring training site in Jupiter, Florida.

One of them was opening day starter Sandy Alcantara, who threw 50 pitches in a simulated game Thursday. He could return during the Marlins’ upcoming trip.

Rojas was in the lineup for Thursday’s game against the New York Mets, but it was postponed when two people in the Mets organization tested positive for COVID-19. The Marlins were still scheduled to play a weekend series at Washington beginning Friday.

Following the Marlins’ outbreak last month, which stranded the team in isolation in Philadelphia for a week, they surged into first place in the NL East helped by replacement players.

“It was amazing and so fun to watch, seeing the guys grind out and knowing what they were going through after a week in a hotel room in Philadelphia,” Rojas said. “The question of whether I’m ready to play doesn’t matter after what these guys showed. They literally rolled out of bed and won.”

Rojas, who has been with the Marlins since 2015, described the timing of his return as a personal decision and said he convinced management he was ready after receiving medical clearance.

“I wanted to lead this way,” he said. “I feel like I earned this opportunity to be the first guy back. They listened to what I had to say about how I was feeling physically and mentally. I wouldn’t be here if I knew I wasn’t hitting the ball well or my swing wasn’t there.” 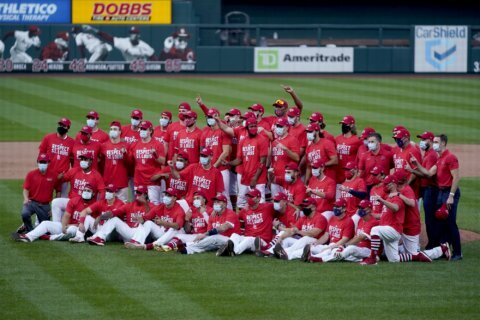