The Reds also chose infielder Robel Garcia as their 29th man for the doubleheader, which was caused by a postponement of the series opener Tuesday night. The Reds had two games postponed over the weekend because of a positive COVID-19 test and Major League Baseball wanted to provide them with an additional day for testing.

Williams added that those players — three in all — have been cleared to participate in games, but they will have to make special arrangements when the Reds depart Kansas City for the start of a four-game series Thursday in St. Louis.

The Cardinals have been among the hardest hit teams during the coronavirus pandemic.

The reason for Senzel’s injury designation was not provided, though he missed time earlier this season after reporting symptoms of COVID-19. He was hitting .244 with two homers, five doubles and two steals in 14 games.

“It’s been, you know, almost a little uneasy, just because of the uncertainty of everything that’s been happening,” Moustakas said. “With baseball, with the games, with scheduling, with the flights, with everything. Mainly we were all concerned about our health and safety and the health and safety of those around us. If we get that right, everything will fall into place. But our main priority is and always will be to keep everybody safe.”

Moustakas has been out since Aug. 4 because of a injured left quadriceps, which also forced him to miss playing the team on which he won a World Series ring and played in another when the Royals visited Cincinnati at Kauffman Stadium.

He is hitting .238 with a pair of home runs through seven games.

“It’s definitely cool to be back at the K. Definitely different to be on the other side of the dugout,” Moustakas said. “I spent a lot of time here, a lot of great year. Had a lot of fun, a lot of great memories. Definitely be interesting once the game starts going but after that, it’s baseball. And we all have a job to do, and figure out a way to beat those guys.” 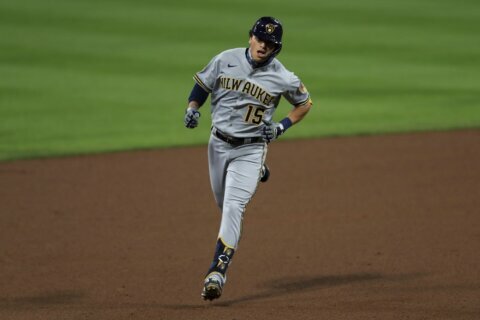