DENVER (AP) — The San Diego Padres made another big move to try and end their playoff drought, acquiring slugger Mitch Moreland in a trade Sunday with Boston.

The Padres haven’t been to the postseason since 2006. They currently have the second-most wins in the NL, trailing only division rival Los Angeles.

Moreland adds even more power to an already potent San Diego lineup. On top of that, he brings big-game experience. He’s been in the postseason in seven of his past 10 seasons.

“Being able to add his makeup, character, that will blend in really well into this clubhouse,” Padres manager Jayce Tingler said. “There’s a positive buzz, energy going around.”

As part of the deal, the Red Sox acquired a pair of prospects from San Diego, outfielder Jeisson Rosario and infielder Hudson Potts.

It’s the second straight day the Padres have made a splashy move. On Saturday, they bolstered their bullpen by acquiring Trevor Rosenthal in a trade with the Kansas City Royals.

Asked if general manager A.J. Preller might be done, Tingler responded: “I would say we’ll wait and see. .. He doesn’t sleep and he’s relentless.”

Moreland, who turns 35 on Sept. 6, was leading the Red Sox with eight homers, 21 RBIs and a .328 batting average. He’s made 19 starts at first base this season and three more as a designated hitter.

Tingler envisions Moreland being in the lineup as a DH and spelling first baseman Eric Hosmer.

The struggling Red Sox became sellers at the looming trade deadline after entering Sunday in last place in the AL East.

“We basically felt, given where we stand and where we are in 2020, and then the importance of depth and talent in the farm system, that there was a level of talent (in return) where it made sense to move him,” Boston chief baseball officer Chaim Bloom said.

Moreland earned his lone All-Star selection in 2018, the same season he helped the Red Sox win a World Series title. He had memorable a pinch-hit, three-run homer in Game 4 to spark Boston to a 9-6 win over the Los Angeles Dodgers.

Tingler knows Moreland from their days together in Texas. Tingler spent 13 seasons with the Rangers organization before joining the Padres this season.

“A lot of people would describe him as a kind of a throwback, a grinding type,” Tingler said. “He’s a big, lumbering man and he’s hard-nosed. He doesn’t back down. His play shows. He’s respected among his peers and people in the game for who he’s been and what he’s done over his last 10 years in the league. He blends into what we’re about.”

“Both these guys have a chance to be really exciting players,” Bloom said. “Very high upside, both of them. Pretty accomplished minor league players playing at (high) levels where they’re very young last year.” 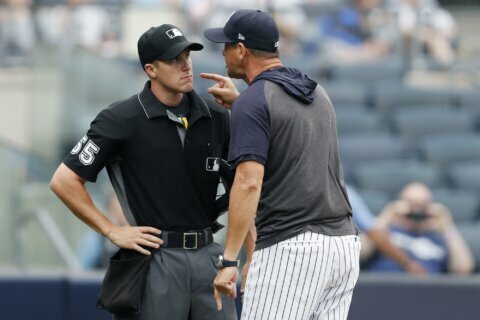 Yankees vs. Rays: the Savages vs. the Stable