ST. LOUIS (AP) — Tyler Naquin hit a go-ahead double in the 12th inning, then Yadier Molina made a baserunning blunder and got trapped for the final out Saturday to give the Cleveland Indians a 2-1 win over the St. Louis Cardinals.

A day after getting 20 hits in a rout, the Indians totaled just five in winning their fourth in a row.

“It is a lot of fun. It’s a good energy,” Indians starter Carlos Carrasco said of the winning vibe. “Everyone is kind of together right now.”

Naquin doubled off Alex Reyes (1-1) to drive in pinch runner Mike Freeman, who started the inning at second base. That was Cleveland’s only hit after the eighth inning.

Molina, who grounded into an inning-ending double play in the 11th with runners on first and second, began the 12th at second base as the automatic runner under MLB’s extra-inning rule.

The slow-footed Molina moved to third on a wild pitch by Brad Hand, and stayed there when Dexter Fowler grounded out.

Matt Carpenter followed with a grounder that first baseman Carlos Santana fielded near the bag. He touched the base for an out, then bobbled the ball for a moment.

Molina was partly down the line toward home, and Santana cut across the diamond with the ball. Molina put up his hands, appearing to indicate he thought Carpenter’s grounder was foul, and was easily tagged out in a rundown to complete a double play.

“When he hit the ball to first base, it looked like it was fair from the dugout,” Indians acting manager Sandy Alomar Jr. said. “Automatically we went back to the bag and Molina just stood there, I don’t know if he knew that the ball was fair or foul but from the dugout it was way fair.”

Said Cardinals manager Mike Shildt: “He broke and realized he probably couldn’t make it and then stopped and felt like he called it foul and clearly he did not.”

St. Louis had the bases loaded with two outs in the 10th inning, but Nick Wittgren (2-0) induced Paul DeJong to pop out to end the inning.

Hand wound up with his 10th save.

Carrasco allowed two hits and two walks with six strikeouts in six scoreless innings for his quality start since Aug. 6 versus Cincinnati.

The Indians limited the Cardinals to four hits, none after the Carpenter’s RBI single on the seventh.

“We had a lot of opportunities and we couldn’t get the hit,” Shildt said. “I know the effort’s there but it’s the execution lacking. We didn’t help ourselves in a couple areas.”

Jose Ramírez connected in the Cleveland first for his seventh home run of the season.

Both clubs wore their No. 42 jerseys that they wore Friday for Jackie Robinson Day. Flaherty, who is Black and has been at the forefront of speaking about racial injustice, wore cleats supporting the Black Lives Matter movement and the names of victims of violence.

Indians: Cleveland is the only team in Major League Baseball without a player on the injured list.

Cardinals: Reliever Genesis Cabrera left the game with a cracked fingernail on his left middle finger shortly after taking the mound to warmup in the seventh inning after striking out the side in the sixth.

Indians: RHP Aaron Civale (3-3, 3.15) will be making his third career interleague start and first career appearance against the Cardinals. He is 1-1 with a 1.84 ERA in interleague action after tossing a nine-inning shutout on Aug. 19 vs. Pittsburgh.

Cardinals: RHP Adam Wainwright (2-0, 2.88) is slated to make his first career start versus Cleveland. Wainwright allowed one run in two innings in his only prior appearance against the Indians on June 27, 2016.

Tellez on Blue Jays’ roster against Rays and Roark left off 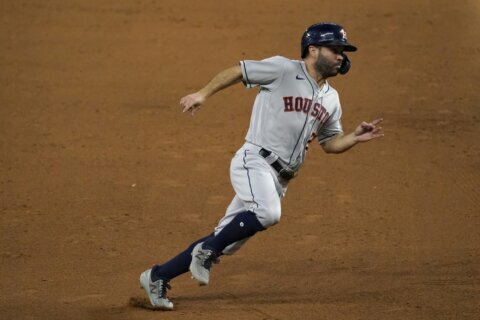