The White Sox have won six consecutive games for the first time since April 2017 as they attempt to snap a string of seven straight losing seasons.

White Sox rookie second baseman Nick Madrigal left the game with an injured left shoulder in the third inning after he was thrown out trying to get from first to third on a single up the middle. Designated hitter Edwin Encarnacion departed in the sixth inning with left shoulder soreness.

Both are expected to undergo examinations Wednesday.

After Milwaukee’s Ben Gamel and Chicago’s Eloy Jimenez hit two-run homers, the White Sox broke the tie in the seventh by capitalizing on the Brewers’ mistakes.

This marked the second straight night Abreu delivered in the late innings. He hit a tying, two-run homer in the seventh inning of Chicago’s 6-4 victory over the Brewers on Monday.

The Brewers threatened in the eighth and ninth but couldn’t tie the game.

Alex Colome earned his third save when Gamel grounded out with runners on third and second after consecutive two-out hits by Ryon Healy and Omar Narvaez.

Brock Holt walked and Sogard singled to start the eighth, but Jimmy Cordero got of the jam as Keston Hiura grounded into a double play and Christian Yelich struck out looking.

Limited to one hit through the first four innings, the Brewers broke through in the fifth as Gamel’s two-run shot into the right-field seats opened the scoring.

The White Sox tied it in the sixth on a homer to center by Jimenez that ended a string of 13 1/3 scoreless innings for Woodruff. In his last start, Woodruff had given up just one hit in 6 1/3 shutout innings as the Brewers won 3-0 at Pittsburgh.

The White Sox placed left-handed pitcher Carlos Rodon on the 10-day injured list with shoulder soreness Tuesday. The injury caused Rodon to leave after only two innings in Chicago’s 6-4 victory over the Brewers on Monday.

In other roster moves, the White Sox purchased the contract of pitcher Brady Lail from their Schaumburg training site and designated outfielder Luis Basabe for assignment.

The pandemic is preventing the between-inning sausage races from taking place at Miller Park this year, but the tradition hasn’t been scrapped entirely. It’s just moving out of the ballpark.

The sausage races instead are taking place at various Milwaukee-area locations and being shown on the Miller Park scoreboard and on social media midway through the sixth inning of select home game. For Monday’s home opener, the Polish sausage won a race that took place at the Sheboygan Falls headquarters of Johnsonville, the event’s sponsor. The chorizo won Tuesday’s race, with the Milwaukee Art Museum serving as the backdrop.

The Brewers and White Sox continue this four-game series but move it to Chicago for matchups Wednesday and Thursday.

A capsule look at the Blue Jays-Rays playoff series

LEADING OFF: Playoffs begin, Bieber vs Cole in prime matchup 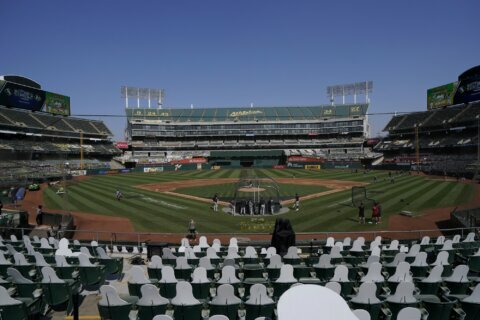 A capsule look at the White Sox-Athletics playoff series