ARLINGTON, Texas (AP) — The Los Angeles Dodgers were away from home for a later-than-usual Jackie Robinson Day.

On the road for the first time in six years to mark Major League Baseball’s annual observation of Robinson breaking the sport’s color barrier, the Dodgers tied the game right before Derek Dietrich’s tiebreaking leadoff homer that started a four-run seventh inning. The struggling Texas Rangers then finished off a 6-2 victory Friday night over the team with the best record in the majors.

“We’re a second-half team. I don’t know what to tell you,” Rangers manager Chris Woodward said. “Overall it was a really good team effort right there, something that we needed.”

Texas had lost 10 of its previous 11 games to wrap up the first half of its 60-game schedule. That included losing two of three games to AL-best Oakland before the Athletics decided not to play the scheduled series finale Thursday to show support for calls for racial justice.

The Dodgers and San Francisco Giants didn’t play Wednesday night for that same reason. They made up their postponed game with a doubleheader Thursday, when Los Angeles (24-10) won both games with shutout victories to avoid its first series loss of the season.

Jackie Robinson Day is traditionally held April 15, the date in 1947 that he made his debut with the Brooklyn Dodgers, but had to be altered because of the coronavirus pandemic pushed back the start of this season nearly four months.

The Dodgers, whose last loss on Jackie Robinson Day had been in 2014 at San Francisco the last time they weren’t at home for that game, were set to be at home again this season before the schedule had to be shortened and shuffled. The day when all players and coaches wear No. 42 was instead held on 75th anniversary of the day that Branch Rickey told Robinson he had been chosen to be the first Black player in the majors. Robinson spent the 1946 season with Triple-A Montreal before opening the 1947 season with Brooklyn.

After Los Angeles got even in the top of the seventh, Dietrich’s opposite-field shot to left off reliever Jake McGee (2-1) put Texas up 3-2. Shin-Soo Choo and Nick Solak added RBI hits, and Jose Trevino a sacrifice fly.

Mike Minor, the Texas lefty still without a win this season, pitched six scoreless innings and exited with a 2-0 lead that was gone almost immediately. Reliever Joely Rodriguez allowed doubles to Will Smith and Corey Seager before Justin Turner’s tying RBI single.

“We just didn’t get that one hit early to get a lead and kept those guys in it,” Dodgers manager Dave Roberts said. “Justin and Corey, both had really good at-bats with two outs. And, you know, unfortunately, we gave the lead back up.”

Turner was robbed of a home run in the top of the third when rookie center fielder Leody Taveras made a leaping catch on the warning track in front of the Dodgers’ bullpen in left-center. Taveras extended his glove above the 8-foot fence to make the catch, while Turner held both arms over his head and could only smile.

Turner left the game after a head-first slide into second base on a stolen base after his game-tying hit in the seventh.

“He was running or sliding, at some point he just felt something in his hamstring,” Roberts said. “We’re thinking more cramp versus mild strain. I do know that he’ll be down tomorrow and we’ll we’ll reevaluate, reassess on Sunday.”

Dustin May, the 22-year-old Dodgers right-hander grew up about 30 miles away in Justin, Texas. He struck out three and walked two while giving up two runs over six innings. “It was an awesome feeling being back in my home state of Texas,” May said. “Playing a team that I grew up watching and rooting was a pretty phenomenal, an awesome experience for sure.”

Woodward said May has “got some nasty stuff. He’s throwing upper 90s to 100, with sink, cut, everything in between.”

Rangers: CF/INF Danny Santana (strained right elbow) was put on the 10-day injured list for the second time this season. … 2B Rougned Odor missed his third game in a row because of an infection in his right eye. 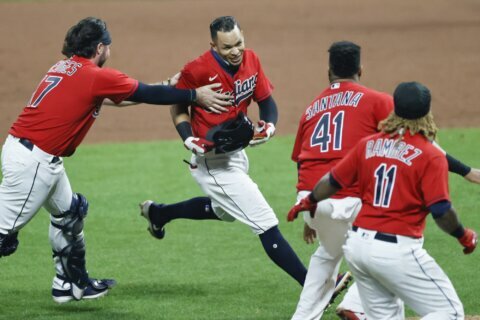