NEW YORK (AP) — This was not what Gerrit Cole had in mind for his debut in pinstripes, and yet…
Listen now to WTOP News WTOP.com | Alexa | Google Home | WTOP App | 103.5 FM

NEW YORK (AP) — This was not what Gerrit Cole had in mind for his debut in pinstripes, and yet it was.

Cole extended his regular-season streak of victories to 19, leading New York over the Philadelphia Phillies 6-3 on Monday night for the Yankees’ seventh win in a row.

With the Yankee Stadium seats empty due to the novel coronavirus, wife Amy watched from home as Cole pitched his home debut for New York.

“Mom and dad had a few of neighbors over in California,” Cole said. “They sent us some pictures as they were watching the game. My folks, they’re a little bummed that they couldn’t be here, to be honest.”

“Even though it is a shorter season, it’s a long ways to go, right” Yankees manager Aaron Boone said. “We need to keep grinding now.”

Cole (3-0) allowed one run and five hits in six innings, struck out four and walked one on 91 pitches, leaving after a 1-hour, 7-minute rain delay ahead of the seventh. His grunts could be heard as easily as Rafael Nadal’s at a grand slam final.

A month shy of his 30th birthday, the right-hander reached 99.3 mph, but he did not have his best arsenal. Cole threw 46 fastballs, 24 sliders, 18 knuckle-curves and three changeups.

Signed to a $324 million, nine-year contract, Cole grew up a Yankees fan, and at his signing news conference in December brought along the now-yellowed sign he had held up as an 11-year-old at the 2001 World Series: “Yankee Fan Today Tomorrow Forever.”

With no fans, there was no Roll Call by adoring Bleacher Creatures counting on Cole to lead the Yankees to their first title since 2009.

“It was special put on the uniform. It was special to warm up in that bullpen and it was special to take the field from that side of the field,” Cole said. “Obviously, pre-coronavirus, when you dream, you don’t dream about pitching in a stadium without any fans. But I guess we’re kind of getting used to it at that point. So I just try to savor the things that that I enjoyed.”

He is 19-0 with a 1.86 ERA over 25 starts, the sixth-longest streak of winning decisions behind Carl Hubbell (24), Roy Face (22) and Rube Marquard, Roger Clemens and Jake Arrieta (20 each). Cole did lose to Washington and Max Scherzer in last year’s World Series opener, part of a postseason in which Cole was 4-1 for Houston.

DJ LeMahieu led off the bottom of the first with a home run against Arietta (0-1), who made his first appearance since surgery last August to remove a bone spur from his right elbow.

Philadelphia was playing after a one-week layoff caused by additional testing; the virus-ravaged Miami Marlins had been at Citizens Bank Park on July 26.

“It seems like the deck is stacked against us,” Arrieta said. “But that doesn’t matter. This is a situation that’s been difficult for every team to deal with.”

After Jay Bruce tied the score with a home run off Cole on a full-count fastball in the third, Brett Gardner led off the bottom half with a drive down the left-field line for the first over-the-wall, opposite-field home run of his big league career.

“Gardy is my boy, but if he’s going oppo the league has a baseball problem.” former Yankees pitcher Phil Hughes tweeted.

During the rain delay, a Yankees player printed the tweet and left it for Gardner to find.

“I just texted him and gave him a hard time,” Gardner said. “All in good fun.”

Gardner is the longest-tenured Yankee and played with Hughes in the minors and in New York. He doesn’t know who printed the text and left it at his locker — yet.

“We’ve got quite a bit of baseball ahead of us and I’ve got a few pranks up my sleeve, so we’ll have some fun with it,” he said.

Aaron Hicks added an RBI double later in the inning for a 3-1 lead, and Gio Urshela blew open the game with a three-run homer in the sixth on a changeup from Deolis Guerra that landed in the visitors’ bullpen in left-center.

Acquired from Toronto for $1 on Aug. 4, 2018, Urshela is hitting .300 with three homers and nine RBIs this season and has 24 homers and 83 RBIs in 141 games for New York. He also made several sparkling defensive plays at third.

“We got to continue to play well and try and keep racking them up,” Boone said.

More rain is ahead Tuesday, and the second of two games in the Bronx was postponed and rescheduled as part of a doubleheader for Wednesday in Philadelphia, where the matchup is to continue with a single game on Thursday. The Yankees will be the home team in the first game of the twinbill.

Aaron Judge went 2 for 4 with a double, ending his career-high best streak of five straight games with home runs.

Giancarlo Stanton stole second in the eighth, his first swipe since Aug. 19, 2018.

RHP Luis Cessa could be activated as soon as Tuesday after recovering from COVID-19. He threw a 40-pitch session Saturday at Scranton in his third rehab outing. New York opened a roster spot after game by optioning RHP Brooks Kriske to Scranton. …. Closer Aroldis Chapman is to throw a bullpen in Scranton on Tuesday or Wednesday in his return from COVID-19.

RHP Aaron Nola (0-1) and RHP Zack Wheeler (1-0) start Wednesday for the Phillies. LHP JA Happ (0-0) will start one of the games for the Yankees. 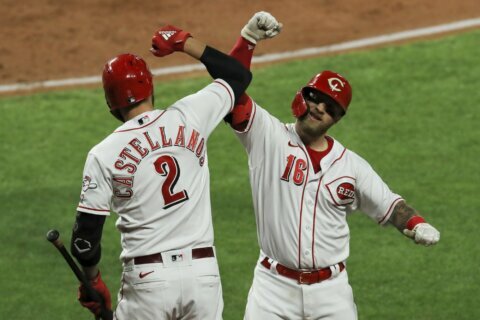