Zooming in to start unprecedented MLB summer camp amid virus

Texas Rangers manager Chris Woodward was going to address his entire team before the start of MLB’s unprecedented summer training camp, just like he did when spring training opened about 4 1/2 months ago. It was on a Zoom call instead of in person this time.

When the New York Mets resume practice, 60-year-old hitting coach Chili Davis will be working with hitters remotely and not initially at Citi Field with players and other staff members. The Seattle Mariners have three assistant coaches who fall into the high-risk category for the coronavirus and will work remotely all season.

At Fenway Park, weights and other exercise equipment were set up Thursday in the concourse under the seats that Red Sox fans won’t be allowed to occupy when the season finally starts.

Things certainly are different for baseball’s resumption amid the pandemic, three weeks before the start of a 60-game regular season. The Rangers, Mets, Mariners and Red Sox are among the teams set for their first official summer workouts Friday, along with the defending World Series champion Washington Nationals minus first baseman Ryan Zimmerman and pitcher Joe Ross after they opted out of the season.

After the Toronto Blue Jays received a Canadian government exemption Thursday to work out at Rogers Centre, every team will be at its home ballpark to restart preseason workouts that abruptly came to a halt March 12 in Arizona and Florida.

The Rangers will hold the first official team activity in their new retractable-roof stadium, even though some players have been working out there for several weeks. Players will be in different groups and times for workouts after Woodward’s remarks by video conference.

Along with some similarity to what he said in February when the team initially gathered at its spring training complex in Surprise, Arizona, Woodward is focusing on the protocols and safeguards put in place by MLB in response to COVID-19, and the urgency of being ready for the sprint of a season that will be 102 games shorter than usual.

“This is a little different. Following protocols, being safe, making sure we’re on time, sticking to schedules, those are things that are critical for our success this year,” he said. “If we can limit the amount of exposure we have, or the risk factor in getting this virus, the team that keeps their people on the field, their players on the field, is probably going to have an advantage.”

While the home ballparks are bigger than those at spring training, teams have to adjust to making a camp environment without having several extra fields next to each other, and the absence of some additional workout-specific spaces.

“It’s a great challenge. I mean, last week I think I grew a few more grey hairs just brainstorming through this,” first-year Mets manager Luis Rojas said. “But we’ve had fun definitely with the excitement of getting baseball back and going through this path. But we did come up with different ideas, and we’re going to stagger the guys. I mean, we’re going to come in in groups.”

Massachusetts Gov. Charlie Baker signed an order Thursday allowing the Red Sox to open Fenway Park without fans. The weights and exercise equipment in the concourse will allow players to work out with more social distancing than would be possible in the usual cramped facilities.

Mariners bullpen coach Brian De Lunas won’t be on the field in Seattle because of long-term kidney issues. The team said hitting coach Tim Laker (colitis) and 68-year-old first base coach Perry Hill, who is also the infield coach, will also work remotely all season.

The Mets will be at Citi Field without Davis, and Rojas said the timeline for the hitting coach to join the team there is uncertain. The New York Post was first to report that Davis wouldn’t be there in person for the beginning of practices because of concerns about the coronavirus. The Post, citing unidentified sources in its report, said Davis does not have the virus.

The Yankees won’t have their first full workout until Saturday, but Gerrit Cole and Adam Ottavino threw bullpens to coaching assistant Radley Haddad at Yankee Stadium on Thursday. Cole, preparing for the July 23 opener at Washington, reached 95-98 mph and pitched three innings. Ottavino pitched two. Each had their own bag of balls.

Aaron Judge, Aaron Hicks and Like Voit were the batters. New York used the home, visitors and auxiliary clubhouses and five mounds: two in each bullpen and one on the field.

“I think the biggest thing right now is just taking inventory when everyone comes in and kind of just making sure they’re kind of at the spot that maybe they talked about being at,” new pitching coach Matt Blake said.

Blake hopes his starters can pitch four to five innings in their first turn through the rotation when the season starts and anticipates starting the season with 15 to 18 pitchers. Masahiro Tanaka, back from Japan, is to throw his first bullpen session Saturday, and James Paxton has healed from February back surgery.

The Chicago Cubs will open camp without left-handed pitcher José Quintana, who underwent surgery Thursday on his lacerated left thumb. He suffered the cut Saturday while washing dishes at his home in Miami.

Quintana is expected to resume his throwing program in about two weeks, when a further determination will be made about how long he might miss. He was 13-9 with a 4.68 ERA last season.

The Philadelphia Phillies will open camp Friday without infielder Scott Kingery and pitchers Hector Neris, Ranger Suarez and Tommy Hunter. The foursome was placed on the 10-day injured list with no specified injuries.

Medical privacy limited what manager Joe Girardi could say about the players’ absence.

“What I can tell you is they’re on the injured list, and that’s about all I can tell you,” Girardi said. “MLB has given protocols on how to handle it.”

In Pittsburgh, the Pirates are closing PNC Park to all outside entities, including media, after the Allegheny County Health Department issued an order banning gatherings of over 25 people. MLB had created a cap of 35 credentialed media for workouts. The team said it will ensure all guidelines are being followed. 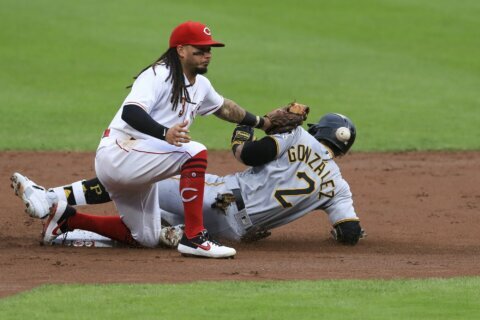 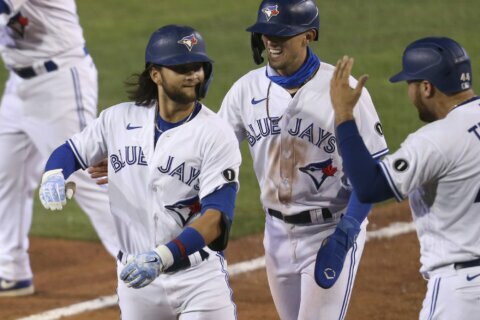 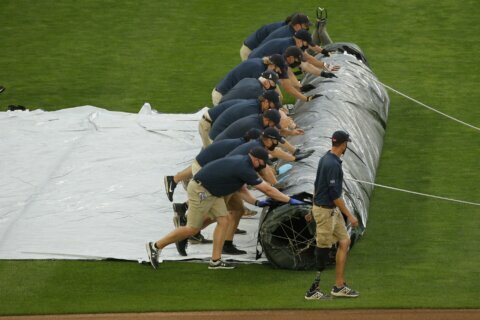