After getting outscored 17-2 in the first two games, the Giants took advantage of Dodgers starter Alex Wood’s struggles to avoid their first 0-3 start since 2012. They scored in each of the first four innings to snap a six-game skid against their NL West rivals.

The Giants lined up near the mound and bumped elbows to celebrate. Kapler and his socially distanced coaching staff did so with a bottle of wine in the clubhouse afterward.

Baseball might be strange in 2020, but it can still be enjoyable.

“There’s music blaring like normal, with the distancing as well,” Giants starting pitcher Logan Webb said. “It’s just fun. We all want to win so bad and that’s what we’re trying to do.”

Wood had trouble finding the plate, throwing 67 pitches, including 29 balls, in three innings. Dodgers pitchers didn’t have a 1-2-3 inning until the seventh, by new reliever Blake Treinen.

“Those first two innings weren’t me in terms of plan of attack,” Wood said. “I kind of got away from my general plan of how aggressive I am. We threw too much soft stuff early.”

The Giants took a 2-1 lead on Wood’s wild pitch to Austin Slater with two outs in the second that scored Mike Yastrzemski, who had a leadoff double. In the Dodgers’ half of the inning, they had a chance to tie it after loading the bases on a catcher’s interference call, a walk and a hit by pitch, all with two outs. That set up Mookie Betts, who flied out to end the threat.

Betts was hitless in five at-bats with a strikeout.

Cody Baragar (1-0) got the win in his major league debut with two scoreless innings of relief.

Flores led off the third with a shot to the left-field pavilion, covered by advertising tarps in the empty stadium. Technology used by Fox in the nationally televised game made it appear to viewers that the outfield seats were filled with fans.

Will Smith’s pinch-hit homer in the ninth cut the Giants’ lead to 5-4. The ball struck a female cardboard cutout fan in the face in the new home run seats in the left-field pavilion. Representing the tying run, Cody Bellinger flied out to end the game.

The Dodgers pulled to 5-3 on Corey Seager’s two-run single in the eighth and then had the bases loaded with two outs. Kiké Hernández grounded to second and Flores’ throw was wide, forcing Darin Ruf to come off the bag to tag Hernández and end the inning.

Back after spending the last three years in South Korea, Ruf’s two-out RBI single after a leadoff walk to Slater scored the Giants’ first run.

The Giants extended their lead to 5-1 in the fourth on Donovan Solano’s two-run double off Dennis Santana with two outs.

The Dodgers committed two baserunning blunders in the fifth when they had just three batters.

“A little too much aggressiveness and a couple of them were just mental mistakes,” manager Dave Roberts said.

Justin Turner’s RBI double tied it 1-all in the first.

Webb allowed one run and six hits in four innings. He struck out two and walked one.

“I thought it started with a high-quality outing by Webby,” Kapler said. “His changeup was awesome. Executed it low in the zone. Had some nice downward movement and did a nice job of pounding the strike zone. It allowed him to pitch into the fifth inning, build up his volume and get ready for his next outing.”

Wood (0-1) gave up three runs and three hits. He struck out four and walked three.

Chris Taylor handled DH duties for the Dodgers a day after nearly getting squashed by Pablo Sandoval in a violent collision at first base. Sandoval outweighs Taylor by a considerable margin. Sandoval entered in the ninth to play first.

Other than opening day, the Giants haven’t announced their starters for the four-game series until the last minute.

“It’s a little bit of gamesmanship we’ll call it,” Roberts said, “but to each their own.”

Informed of Roberts’ comment, Kapler said, “I don’t really have strong feelings about that. Certainly we want to read the comments first before having any sort of reaction to it.”

Vin Scully appeared via video to give the pregame call of, “It’s time for Dodger baseball!” The retired Hall of Fame broadcaster wore a jacket and tie and appeared to be standing in his backyard.

The Giants had yet to announce their starter for Sunday. Dodgers LHP Julio Urías takes the mound for the series finale. He was 4-3 with a career-best 2.49 ERA and four saves last year. 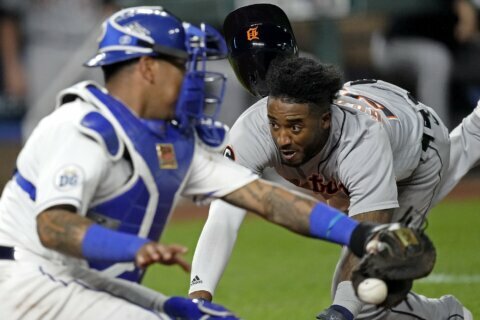