NEW YORK (AP) — Spencer Torkelson slugged his way through college, bashing baseballs all around the country with eye-popping power.

All those impressive drives made the decision easy for the Detroit Tigers, who selected the Arizona State star with the No. 1 pick in the Major League Baseball amateur draft Wednesday night.

But while Torkelson was long considered the favorite to go first overall, the surprise came when he was announced as a third baseman by Commissioner Rob Manfred. Detroit plans to move Torkelson to the hot corner from first base, where he played for the Sun Devils.

“It shows the amount of respect they have for me as an athlete,” a smiling Torkelson said on the MLB Network broadcast. “I’ll take it and run with it. I like to label myself as a baseball player, and you give me a bat, a ball and a glove, and you know what? I’m just going to want to win.”

Arkansas outfielder Heston Kjerstad went No. 2 to Baltimore, which took Oregon State catcher Adley Rutschman with the top pick a year ago.

Shortened dramatically because of the coronavirus, the draft gave fans the closest thing they’ve had to a live big league baseball event since spring training was stopped in March. It came as owners and players continue contentious labor negotiations aimed at starting an abbreviated, pandemic-delayed season this summer — likely with no crowds in ballparks.

Not long before the first pick, Manfred said there is a “100%” chance MLB will play ball this year.

After having the worst record in the majors last season, Detroit opened the draft for the second time in three years. The Tigers took Auburn right-hander Casey Mize in 2018, and now they’ve got a powerful bat that could anchor their lineup for years to go along with an arm they hope is a future ace.

With power to all fields and a great eye at the plate, the 6-foot-1, 220-pound Torkelson established himself as college baseball’s top slugger after going undrafted out of high school. He hit 54 home runs at Arizona State, two shy of the school record set by Bob Horner — who was drafted No. 1 overall in 1978.

Torkelson likely would have obliterated that mark if his college season hadn’t been halted after just 17 games because of the pandemic. The Petaluma, California, native hit .340 with six homers and 11 RBIs this year.

“We know he can play first. But our scouts strongly feel that he can play third base, and that’s our intent at this point,” Detroit general manager Al Avila said on the ESPN broadcast. “He’s exactly the type of player we hoped would be there for us to get with the top pick. Obviously, he’s one of the most productive hitters in college history.”

This year’s draft originally was scheduled to take place for the first time in Omaha, Nebraska, as a lead-in to the College World Series. Instead, the COVID-19 outbreak caused MLB to make some drastic changes, including holding the draft remotely — much like the NFL did in April — and shaving it from three days with 40 rounds to only two days and five rounds.

Manfred announced the first-round selections as usual from a podium at MLB Network studios in Secaucus, New Jersey. He also addressed racial injustice and the recent protests that have occurred all over the country and the world.

Executives from all 30 teams held up signs at the beginning of the broadcast that read: “Black Lives Matter. United For Change.”

The shortened — and in some cases even canceled — college and high school baseball seasons presented unique challenges for big league scouting departments, which had to rely more on video of prospects instead of attending games to help with their evaluations.

Perhaps that contributed to a record seven straight college players being selected to begin the draft.

“We’ve seen the trend in this direction over the last number of years,” Milwaukee scouting director Tod Johnson said after the Brewers took UCLA outfielder Garrett Mitchell at No. 20. “Those three years of development that players get when they go to college tells us a lot about them. It helps to make these decisions with more information. We have more of a statistical record for college players against quality competition.

“All those factors I think have trended toward moving toward a more college-heavy draft.”

Florida high school outfielder Zac Veen was chosen by Colorado with the ninth pick, followed by the Los Angeles Angels selecting Louisville lefty Reid Detmers to round out the top 10.

Tampa Bay took Arizona State shortstop Alika Williams — a college teammate of Torkelson’s — with the final pick of the first night at No. 37 overall.

Rounds 2-5 will be held Thursday, for a total of 160 players selected.

Torkelson became the fourth Arizona State player selected first overall, most of any school. He joined Horner, left-hander Floyd Bannister (1976) and outfielder Rick Monday, who was the top pick in baseball’s inaugural June amateur draft in 1965.

Houston will have to wait until pick No. 72 before it makes its first selection after being stripped of its first- and second-round selections by Manfred as part of the team’s punishment for breaking rules against using electronics to steal signs during games.

Boston lost its second-round pick for violating rules against in-game use of video to identify pitch signals.

Undrafted players need to wait until Sunday before they can sign with major league teams, who can offer signing bonuses only up to $20,000 as agreed upon by Major League Baseball and the players’ association. 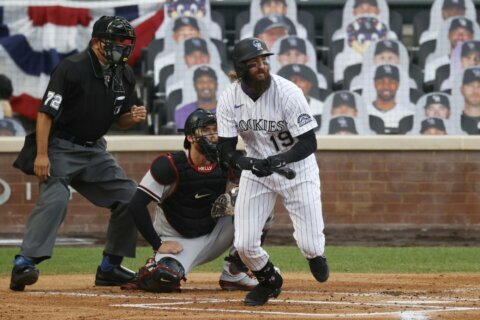 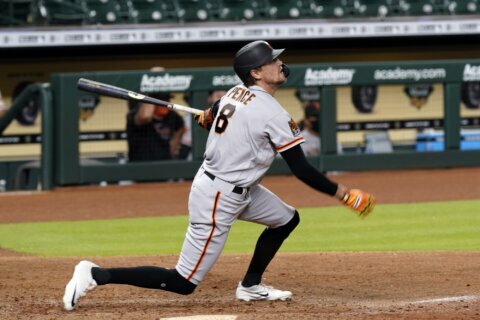 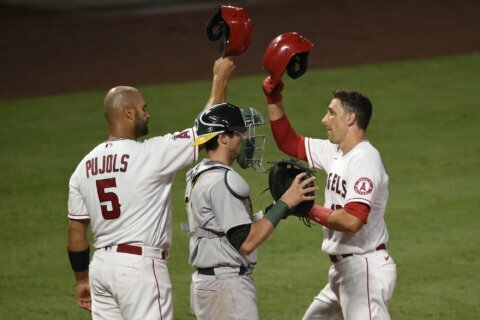