Yankees need ace like Gerrit Cole as they pivot toward 2020

While there was no Game 7 for the Astros’ ace to face the Yankees in the AL Championship Series, could he start New York’s opener at Baltimore on March 26?

“The work never ends,” New York manager Aaron Boone said after Saturday night’s season-ending Game 6 loss. “We’ll continue to try and I guess close that gap or put ourselves in a position to get over the hump. I know everyone in our room believes we will, and we’ll have a lot of battle scars when we do finally get to the top of that mountain.”

Boone memorably called his team Savages in the Box during a midsummer tirade at an umpire. While that may be true, he lacked Marauders on the Mound.

Specifically in his rotation.

New York starters had a 4.51 ERA, 15th in the major leagues, well behind the elite staffs of Los Angeles Dodgers (3.11) and pennant-winning Washington (3.53) and Houston (3.61). Yankees starters were just 26th among the 30 teams in innings, more than 160 fewer than the Nationals and nearly 130 less than the Astros.

Cole will be the top available starter on the free-agent market, and the 29-year-old right-hander is likely to top the record contract for a pitcher, David Price’s $217 million, seven-year deal with Boston signed ahead of the 2016 season.

Lower-priced options include Zack Wheeler and Rick Porcello. Washington’s Stephen Strasburg could become available if he opts out of the remaining four seasons and $100 million left in his $175 million, seven-year deal.

Spending on starting pitching has repercussions on all other decisions for a team that went back above the luxury tax threshold this year after dropping below for the first time in 2018. Shortstop Didi Gregorius, outfielder Brett Gardner and injured reliever Dellin Betances are eligible for free agency, and closer Aroldis Chapman can opt of the final two seasons and $30 million of his contract and go free.

Winning their first AL East title since 2012 and finishing the regular season with 103 wins despite 30 players going on the injured list left little satisfaction to a team that finished a full calendar decade without a World Series appearance for the first time since the 1910s.

“It’s not a successful season because we’re not just playing to get 103 wins and then just sleep,” Gregorius said. “We want to play to get to the World Series and win it, and that’s what we played the whole year for.”

Gregorius said his preference is to remain in the Bronx, but the Yankees might not be able to afford him. Their payroll was baseball’s second-highest this year behind Boston, and New York might prefer to reallocate Gregorius’ salary for pitching rather than make a long-term commitment to a shortstop who turns 30 in February. Gleyber Torres could be shifted to shortstop and DJ LeMahieu, New York’s best all-around player in his first season with the Yankees, could take over at second, where he won three Gold Gloves with Colorado.

New York navigated through this year despite losing ace Luis Severino to a spring training lat muscle injury that sidelined him until September,

Domingo Germán emerged to go 18-4 until a late-season domestic violence incident led Major League Baseball to put him on administrative leave. James Paxton struggled in the first half, rediscovered his breaking ball in the second half and went 15-6, and Masahiro Tanaka (11-9) had a puzzling loss of effectiveness with his splitter.

J.A. Happ (12-8) was mostly disappointing and CC Sabathia (5-8) spent four stints on the injured list in his final season. With no other good options, the Yankees used Chad Green as an opener 15 times.

Much like Sabathia and A.J. Burnett were added to Andy Pettitte and Joba Chamberlain in 2009, the Yankees could use a front-end injection to lessen the load of a bullpen that despite rest in September tired against the Astros. Adam Ottavino, Tommy Kahnle, Green and Chapman all faltered just enough that New York could not overcome an offense outscored 22-21 over the six games.

While the Yankees led the major leagues with 943 runs during the regular season, were second in homers with 306 and topped batting with runners in scoring position at .294, they were .171 (6 for 35) RISP against the Astros, stranded 42 runners, scored 15 of their runs on homers and struck out 64 times.

“I think we’re a better team this year than we were last year,” Boone said. “And we’ll work very hard in the winter in every phase, from the front office and the decisions we make with what players we bring in, what players we lose.”

Giancarlo Stanton was limited to 18 games in the season and five in the playoffs by enough orthopedic injuries to fill a few screens of WebMD. Aaron Judge strained an oblique that sidelined him for two months, then needed two more months to regain his stroke.

Aaron Hicks played in just 59 games during the season due to a spring training back injury and an August elbow injury before making a surprise return against the Astros. Hicks had thought he was headed to Tommy John surgery.

Gardner had his best season at the plate at age 36 and could be brought back for another year as insurance to more injuries in the outfield.

His wore a shirt under his jersey Saturday that told the story of the Yankees season: “Next man up.”

“It doesn’t matter what was thrown at us,” Gardner said. “We were able to find a way to push it to side and continue move forward and focus on the task at hand.”

Until the Astros proved too much and eliminated the Yankees for the third time in five years. 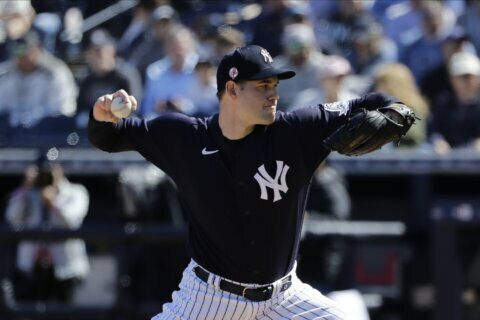