The Astros’ 98th victory tied them for tops in the majors with the New York Yankees, who lost at Toronto. Both are 98-53.

Miley didn’t make it through the first without a challenge. Adalberto Mondesi got an infield hit and raced home on Jorge Soler’s first triple of the season, a gapper to right-center. Soler has 44 home runs this year, but this was only his third career triple and his first since he was with the Chicago Cubs in 2015.

Miley fell behind 3-0 to Hunter Dozier before striking him out.

“That was a huge boost, probably the out of the game for him,” Astros manager A.J. Hinch said.

Miley (14-5) then fanned Ryan McBroom to end the first. He settled in and allowed two runs on seven hits and two walks in six innings.

Miley was knocked out in the first inning in each of his previous two starts. Last Tuesday, the A’s tagged him for seven runs in what became a 21-7 drubbing, part of Oakland’s three-game sweep at Houston.

“Once I got out of the first inning, a big weight came off my shoulders. So just go in and attack and I was able to go six,” Miley said.

It was Royals starter Jakob Junis (9-14) who left early on Sunday, allowing five runs on seven hits in 2 2/3 innings, his shortest outing in 77 career starts. After the game, manager Ned Yost indicated this might be the last start for Junis because he’s already exceeded 175 innings.

“He came out razor-sharp in the first inning and I’m like, ‘Man, he’s going to really, really be good,'” Yost said. “And then the second and third inning he really, really struggled with command. The slider wasn’t there tonight. I think the innings are adding up for him this time of year.”

Gurriel homered to open the second and Reddick singled for the first of his five hits. The first two came against Junis. Then Reddick pulled a two-run homer down the right-field line off reliever Eric Skoglund in the fifth inning for a 7-1 lead. Reddick added two more singles. He also scored three runs.

Reddick got great support from his teammates in the dugout.

“They’re telling me to go out and get the fifth one and, as soon as I hit it and it got through the infield, I could hear my dugout as I was running down the baseline,” Reddick said. “A great feeling all around. These days don’t come around without a few lucky hits in there.”

Tucker also homered down the right-field line with his two-run shot off Kyle Zimmer in the eighth.

MIley thought back to his last start and the Astros’ three losses to the A’s.

“Oakland’s a good team and they got us. They really needed to win those games and they played us really well,” Miley said. “We came into Kansas City and took care of business.”

Hinch said his team should be plenty motivated to finish with the best record in the majors and earn home-field advantage throughout the playoffs.

“We want to win as many games as we can,” Hinch said. “Of course, the home field matters but it’s not an end-all, be-all. There’s a lot that has to happen to get to the finish. It’s important. We’re trying to win every game. Our mentality in (the clubhouse) is really good. … We feel like we have the best team in baseball. That can be represented in the record, sometimes it’s not. We don’t control what the Yankees do or what the Dodgers do or what the Braves are doing. We only control what we’re doing.”

The Astros, after an open date Monday, return to Houston on Tuesday night for the first of two games against Texas. The Rangers will match RHP Lance Lynn (14-10, 3.72 ERA) with Justin Verlander (18-6, 2.58). Verlander has held opponents to a .168 average, tied with teammate Gerrit Cole for the majors’ best. 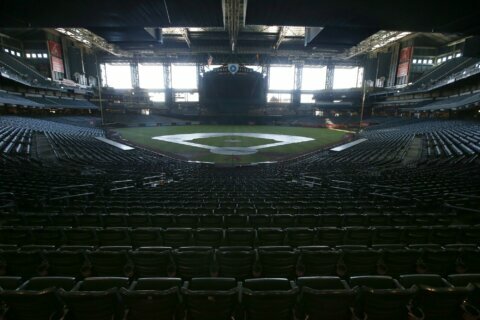