DENVER (AP) — Ryan McMahon filled in for Nolan Arenado in the field and did a spot-on impersonation of the…
Listen now to WTOP News WTOP.com | Alexa | Google Home | WTOP App | 103.5 FM

DENVER (AP) — Ryan McMahon filled in for Nolan Arenado in the field and did a spot-on impersonation of the slugger at the plate.

McMahon hit two home runs and drove in four runs to lead the Colorado Rockies over the San Diego 10-5 on Sunday for a three-game sweep that ensured the Padres’ ninth straight season without a winning record.

“When you finish a series and score 23-24 runs, you expect to eke out a win or two,” said Padres manager Andy Green after his team was outscored 31-23 in the series.

Josh Fuentes also went deep and Chi Chi González got his first major league hit and RBIs in a short outing to help the Rockies win for the fifth time in the last seven games. Colorado swept a series for the first time since taking three from Miami Aug. 16-18.

“When you can get a sweep and participate in it, it’s awesome,” Fuentes said.

San Diego (68-81) has not won more than 77 games since 2010. The Padres are one defeat from matching the team mark for consecutive losing records, set from their expansion season of 1969 through 1977.

González, who got his first win in four years in his last outing, struggled with control and left after four innings. His two-run single in the second inning off Cal Quantrill (6-8) put the Rockies ahead for good.

“You look back at the outing and he gave up a two-run homer after that,” Green said of Quantrill. “It was a battle; 75 pitches in three innings is a battle and he wasn’t able to find a lot of swing-and-misses.”

McMahon, Fuentes and Garrett Hampson had three hits each.

Wil Myers, Luis Urias and Josh Naylor homered for San Diego, which has lost four straight. Myers finished 2019 hitting .423 against the Rockies, including going 2 for 3 with two walks Sunday.

Myers’ 18th home run, a two-run shot, came after McMahon hit one to left-center to put Colorado ahead 4-1. McMahon added an RBI single in the seventh and Fuentes later hit a three-run shot to left to break it open.

McMahon hit a solo homer with one out in the eighth, his 22nd, to give him the fourth multihomer game of the season and his career. He last did Aug. 17th against Miami.

He is tied for second on the team with 80 RBIs. It’s also the most RBIs ever by a Colorado player who is predominantly a second baseman.

“He had a monster day and helped us win a ballgame,” Colorado bench coach Mike Redmond said after the game. “We’re seeing the growth of a great player and hopefully a Rockie for a long time.”

McMahon had just one assist in the field, a high throw that Fuentes was able to get to and get on the bag for the out.

“I think the position’s just good luck right now,” McMahon said. “It’s really good when we can get a win like that and give Nolan a complete off day. He’s our rock.”

Rockies: LHP Kyle Freeland (left groin strain) is scheduled to throw a simulated game Tuesday. He has been out since Aug. 23 but hopes to return before the end of the season.

Padres: LHP Garrett Richards is expected to make his season debut at Milwaukee on Monday. Richards underwent Tommy John surgery in the offseason.

Rockies: RHP Antonio Senzatela (9-10, 6.87 ERA) will face the New York Mets for the second time this season to open a three-game series. Senzatela earned his first win since July 14 when he beat St. Louis on Wednesday. 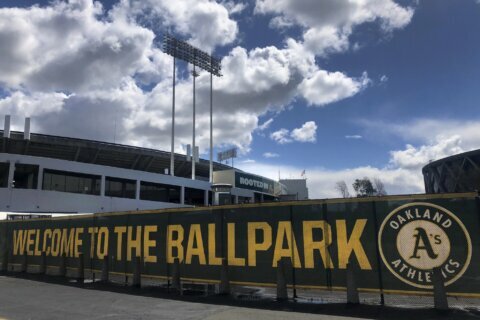 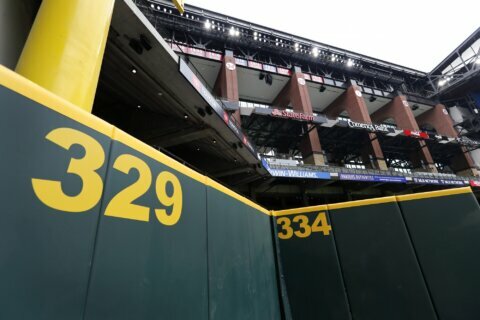