SEATTLE (AP) — There’s not much of a scouting report on Seattle Mariners rookie Kyle Lewis. After two major league…

SEATTLE (AP) — There’s not much of a scouting report on Seattle Mariners rookie Kyle Lewis. After two major league games, an impressive one is taking shape.

Lewis broke up a no-hitter bid with a home run for the second consecutive game, helping the Mariners to a 5-3 win over Sonny Gray and the Cincinnati Reds on Wednesday night.

“You don’t know guys as well for sure when they first come up,” Reds manager David Bell said. “But we have an idea how to attack him. It says a lot about him. His first couple games, you can clearly see why he’s been a top prospect and talent. It doesn’t’ take long to see that. He’s a guy that just kind of pops out at you. You can see it when he walks out on the field. It looks like he’s going to be a good one.”

Just as he did on Tuesday night against the Reds’ Trevor Bauer, Lewis delivered Seattle’s first hit of the game with a towering homer. In Tuesday’s 4-3 win, Lewis hit a solo home run to left field in the fifth inning for his first career hit. On Wednesday, he sent Gray’s 105th pitch of the game into right field for a three-run homer in the seventh, his second major league hit.

“The way the ball jumps off the bat, we’ve seen a few guys with that kind of power here,” Mariners manager Scott Servais said. “That ball was in the air forever.”

Lewis is the 24th rookie since 1908 to homer in each of his first two games, and the third Mariners player to accomplish the feat. The 6-foot-4 right fielder is one of the crown jewels in the Mariners’ rebuild. He’s getting his first taste of the majors after being called up with three other prized rookies on Tuesday and is quickly becoming a clubhouse favorite because of his timely hits and inspiring backstory after recovering from a catastrophic knee injury.

After hustling around the bases Tuesday night, Lewis admitted he tried to enjoy the experience Wednesday.

“I tried to make a point to slow down a little bit, jog, try to feel it out and feel the energy,” Lewis said. “That was really cool.”

Gray struck out nine against a lineup that included four rookies. He was rarely threatened, but was done in by a few long at-bats and a sloppy start to the seventh, when he hit Austin Nola with a pitch, then walked Kyle Seager.

Gray, a free agent signing before this season, was pulled after allowing a single to Daniel Vogelbach, one batter after Lewis. He matched his season high with 111 pitches in 6 1/3 innings. It was his third career two-hit performance.

“He’s just found ways to get better each time out,” Bell said. “When we acquired him, he’d had a lot of success in his career, he had the stuff and he had the track record as a very solid pitcher. But he’s found ways to get better. I know he’s comfortable here and we have a good support system around him. But he deserves all the credit because he’s been able to build. Each time out he’s been able to just get better as a pitcher.”

Nola and Seager added RBI hits in the eighth inning against reliever Kevin Gausman to secure the win for Marco Gonzales (15-11). The lefthander struck out seven and allowed five hits in seven innings as he extended his career-best win total. He gave up an RBI double to Joey Votto in the third and a solo home run to Phillip Ervin in the fourth, then didn’t allow another hit.

Brandon Brennan struck out two in a 1-2-3 eighth and Anthony Bass earned his fourth save and second in two nights with two strikeouts.

Asked what he thought of the rookie who came up big, Gonzales smiled and asked, “Which one?”

“I’m so happy for him, just to come up here and have an impact like that,” Gonzales said of Lewis. “Just to break up a no-hitter two days in a row, you don’t see that. From a first-year guy you definitely don’t see that. I’m really proud of him.”

Seattle manager Scott Servais was ejected by home plate umpire John Libka in the bottom of the ninth inning.

Servais was steamed that the umpires counted a run that scored when pinch-hitter Derek Dietrich’s back swing deflected his third strike to the backstop, allowing a run to score with bases loaded.

The type of play is not included in replay reviews and the umpire crew was unable to see the deflection. Servais argued the call with Libka, then returned to the dugout where he continued to shout at the umps.

“My temperature and blood boiled really quickly there and the umpires didn’t want any part of making a decision on it,” Servais said. “It’s one of those plays that ultimately you’ve got to get it right.”

A day after expressing optimism about his availability, Reds manager David Bell said CF Nick Senzel (shoulder) is not progressing as well as hoped. The two thought Senzel could serve as a runner or hitter in certain situations, even making a deal that there would be no head-first slides. But Senzel said his shoulder hurts when he attempts to hit, as well.

“Anything I’ve been trying to do throwing or hitting, it just hasn’t felt right,” Senzel said. “We’ll just keep going day by day. That’s really all there is to it.”

With 16 games left, though, Bell wonders if Senzel and fellow injured players Adam Wood (back) and Jesse Winker (cervical strain) will make it back into the lineup this season.

“They’re all unique situations, unique injuries,” Bell said. “But at this point, when you look at how many games we have left, we don’t’ know if we’re going to get them back or not.”

Mariners: J.P. Crawford (hamstring) cleared himself to play and the team will soon follow. Manager Scott Servais said the shortstop will likely return to the lineup Thursday or Friday. In the meantime, rookie Donnie Walton got his first major league start at shortstop Wednesday and will back up Crawford the rest of the year.

Rookie Jake Fraley’s season is over after an MRI revealed a strained ligament in his right thumb. The centerfielder jammed his thumb in a light collision with teammate Mallex Smith while trying to make a catch Saturday at Houston.

Fraley won’t need surgery, but an estimated recovery time of four weeks takes him into the offseason.

“It’s unfortunate,” Servais said. “This time is really important for these guys. Not so much geared to how they perform or the results, it’s just getting the experience. I feel really bad for him.”

OF/DH Domingo Santana (elbow strain) has been throwing lightly on the side and could return to the lineup as a designated hitter this weekend or on next week’s road trip.

Reds: RHP Tyler Mahle (2-11, 4.94 ERA) takes the mound for his first start against the Mariners and will be seeking his first win since May 31.

Mariners: RHP Justin Dunn will be making his major league debut as an opener for Tommy Milone. Dunn is expected to pitch two to three innings. 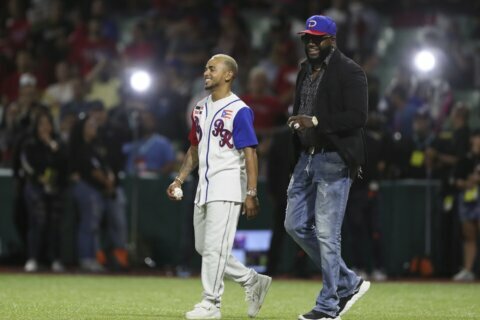