The Los Angeles Angels say the eight-time All-Star will have surgery on his right foot this week because of Morton’s neuroma, a thickening of tissue around a nerve leading to toes that causes pain.

“I kind of knew when I first got my MRI a few weeks ago that I would probably need surgery at the end of the year to get it removed,” Trout said Sunday. “Just got worse. We tried everything. The training staff has been awesome. Some days it would feel good. Some days, once the thing cleared up, it was tough to walk.”

Trout was scheduled to fly with the team to New York on Sunday evening for a series with the Yankees that starts Tuesday. He is to return to Los Angeles on Thursday and have surgery later in the week.

“It just didn’t get better,” Trout said. “It’s been that way for a couple weeks. We tried injections, tried the cryoablation (cold fluid) — thought that would help. As soon as I went out there and started running, it flares up. After it clears up, in about 30-40 minutes it’s tough to walk on.”

Trout finished with a career-high 45 home runs, 104 RBIs and a .291 batting average, putting him in contention to win his third AL MVP award along with four second-place finishes. The 28-year-old outfielder had 110 walks, a .438 on-base percentage and 1.083 OPS in his first season after agreeing to a $426.5 million, 12-year contract, baseball’s largest deal by total and average salary.

“It’s my mindset coming in ever year, I want to be best player in the league,” Trout said. “Ever since I was a kid, that’s always been my mindset, just be the best. Thinking about being done when you have two weeks left, it sucks. I was having my best season.”

Asked whether he thought he would be able to play if the Angels were in playoff contention, Trout said: “Oh yeah, for sure. Obviously, if we were in a playoff race, we would try to be out there, even if DH-ing, or whatever I could do to help the team win.”

Trout last played on Sept. 7. He said Saturday he hoped to play in Sunday’s series finale against Tampa Bay as a designated hitter. He felt pain when running the bases Sunday morning.

Los Angeles already has been eliminated from postseason contention.

“I heard it’s a pretty easy rehab, like a four-week thing,” Trout said. 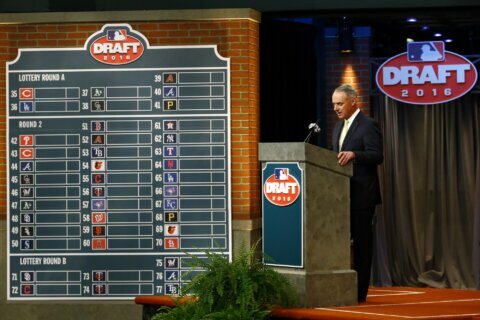