PHILADELPHIA (AP) — Hittin’ season has arrived for the Philadelphia Phillies.

Manuel was back in red pinstripes in his old dugout exactly six years to the day the franchise icon managed his last game for the Phillies. The man who coined the phrase “hittin’ season” heard “Charlie! Charlie! Charlie!” chants after Realmuto connected to make it 10-0 in the third.

“There was an incredible energy in the ballpark and rightfully so. Charlie has earned that adulation,” Phillies manager Gabe Kapler said. “He’s a great influence on our group.”

Hamels, the 2008 NLCS and World Series MVP with Manuel’s Phillies, was roughed up in his first game in Philadelphia since he was traded to Texas in July 2015. Hamels (6-4) gave up eight runs and nine hits in two-plus innings.

“I have tremendously good memories here,” Hamels said. “You take games like this and I know what I need to do to get better. Tough love from Philly really taught me how to do it.”

Aaron Nola (11-3) benefited from the offense’s rare outburst. He allowed three hits, including Kris Bryant’s homer, and struck out seven in seven innings.

“The mood was pretty hype,” Nola said. “It’s always going to be like that when you score runs.”

Hamels received the loudest applause during pregame introductions and got a standing ovation when he came to the plate already trailing 4-0 in the third. He wore longtime Phillies executive David Montgomery’s initials on a uniform patch. Montgomery, who died in May after a five-year fight with cancer, had a close relationship with Hamels.

Hamels said he didn’t get permission to wear the patch.

Harper drove an opposite-field homer out to left-center to give the Phillies a 2-0 lead in the first. His solo shot landed in the second deck in right field in the sixth. Harper has six homers and 11 RBIs in the last 11 games. He’s up to 24 homers and 83 RBIs. After his second homer, Harper handed Manuel a cup of water in the dugout.

“He was working so hard and everybody was cheering his name,” Harper explained. “I think Charlie’s never seen a homer he didn’t like. It’s fun to have him.”

Hamels was suspended five games in 2012 for admitting he purposely hit Harper with a pitch in the rookie’s eighth career game. That’s all in the past now, however.

Nola lined an RBI single in the second. Hamels was pulled after he didn’t cover first base on Adam Haseley’s grounder to Anthony Rizzo that turned into an RBI infield single. Alec Mills entered and Realmuto slammed his 17th homer two batters later on an 0-2 pitch.

The Phillies called up 1B Logan Morrison from Triple-A Lehigh Valley. Morrison hit 38 homers for Tampa Bay in 2017, struggled with Minnesota last year and has spent this season in the minors.

Cubs: OF Jason Heyward wasn’t in the lineup because of left knee inflammation. He’s day-to-day.

Phillies: RHP Jake Arrieta was placed on the 10-day injured list and said he will likely have season-ending surgery to remove a bone spur in his pitching elbow. 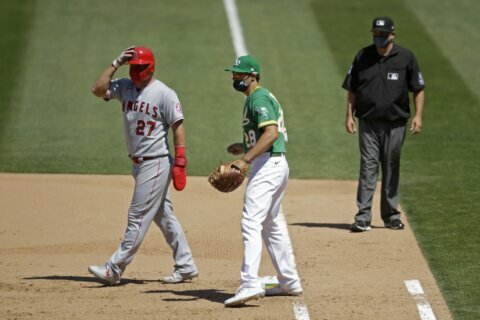 So far in MLB, West is best at avoiding COVID-19 disruption 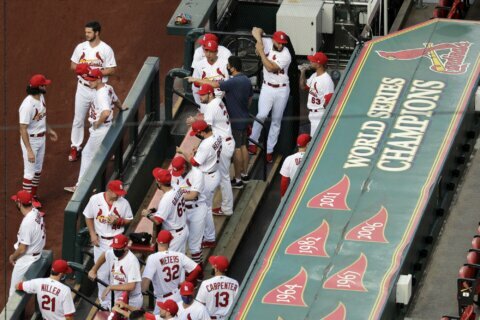 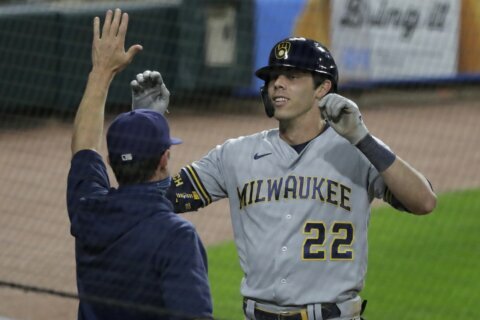