They took out their frustration on the Dodgers, who had a rare night of swinging and missing.

Didi Gregorius hit a grand slam off All-Star Hyun-Jin Ryu and added a solo shot to help the Yankees set a club record for homers in a month in a 10-2 victory Friday night in a matchup of the two teams with the best records in baseball.

“We needed a rebound game,” slugger Aaron Judge said. “We were looking forward to this.”

Judge, Gary Sánchez and Gleyber Torres also homered as the Yankees ended a four-game skid. They have a major league-leading 57 homers in August, their most in any month.

Starting on five days’ rest, James Paxton (10-6) allowed two runs and five hits in 6 2/3 innings to win his fifth straight start. He struck out 11 — one off his season high — and walked none.

“I feel like he’s been on the verge of having this outing for a while,” Yankees manager Aaron Boone said.

The teams’ first meeting in three years had a postseason feel, even though neither club looked the part. The Yankees’ pinstripes and Dodgers’ blue and white uniforms were cast aside on Players’ Weekend. The Yankees wore all black and the Dodgers (85-45) donned all white with player-chosen nicknames on the back.

“Before the first pitch, you could feel the energy,” Dodgers manager Dave Roberts said.

The sellout crowd of 53,775 saw a potential October preview between two franchises that used to battle in New York before the Dodgers moved West before the 1958 season. They’ve met 11 times in the World Series, with the Yankees winning eight titles.

“To come play a big interleague series at Dodger Stadium, I think our guys relished that,” Boone said. “To have those impact at-bats with slug against a guy like Ryu, up and down the lineup, it was really nice to see.”

After scoring just nine runs in Oakland, the Yankees (84-46) cranked up their offense early. They led 2-0 in the third on the homers by Judge, who has gone deep to left field twice in four days after not pulling a homer previously this season, and Sánchez.

Ryu (12-4) opened the fifth by allowing consecutive singles to DJ LeMahieu and Judge. After Torres grounded out, Ryu intentionally walked Sánchez to load the bases.

That set up Gregorius, who launched a 90 mph fastball into the right field pavilion for his fifth career grand slam and first allowed by Ryu in his career. Gio Urshela doubled to chase Ryu before Brett Gardner’s RBI double off Adam Kolarek made it 7-1.

“It was the right choice to walk Sánchez,” Ryu said through a translator. “The pitch to Didi was a mistake. I kind of wish I’d made more pitches to expand the strike zone.”

Gregorius homered again in the ninth.

Ryu struggled through his second straight sub-par outing. The left-hander came in with baseball’s best ERA of 1.64, but he gave up a career-high-tying seven runs and nine hits in 4 1/3 innings, his shortest outing since June 28. He struck out seven and walked one.

“I always emphasize command of pitches and I obviously couldn’t do that when you look at the home runs,” he said.

Ryu was coming off a 4-3 loss at Atlanta in which he allowed all four Braves’ runs in 5 2/3 innings.

Torres homered with two outs off Yimi Garcia in the sixth for an 8-1 lead.

The Dodgers’ run of three straight wins and five victories in a row at home, including consecutive walk-off wins, came to an abrupt halt.

“Fortunately, it only counts for one loss,” Roberts said. “It was an ugly one across the board.”

Yankees: 1B Luke Voit (sports hernia) was 0 for 3 with a walk and a strikeout in his first rehab game with Triple-A Scranton/Wilkes-Barre.

Sánchez became the fastest catcher in major league history to 100 homers in his 355th career game. He surpassed Mike Piazza, who did it in 422 games with the Dodgers.

Dodgers slugger Cody Bellinger struck out swinging in all three of his at-bats before he was replaced defensively in the seventh.

“We were just trying to throw him strikes and get after him,” Paxton said. “We didn’t want to give him anything in the middle of the zone.”

New York acquired pitcher Cory Gearrin off waivers from Seattle. He was 0-2 with a 3.92 ERA in 48 games, including two starts, for the Mariners this season. The 33-year-old right-hander also has been with Atlanta, San Francisco, Texas and Oakland in his eight-year MLB career. To make room for Gearrin on the 40-man roster, right-hander Domingo Acevedo was released. 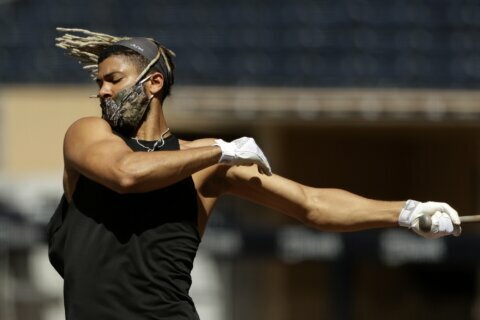 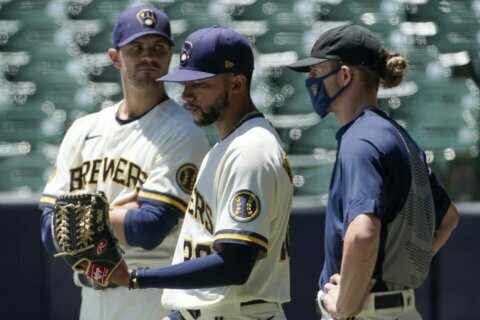 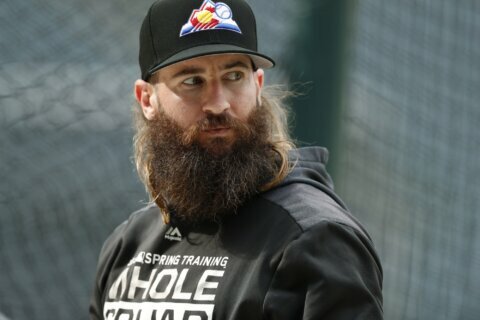