DETROIT (AP) — Charlie Morton allowed five hits in seven innings, extending his unbeaten streak to 20 starts and leading the Tampa Bay Rays to a 4-0 win over the Detroit Tigers on Wednesday night.

Morton (7-0) hasn’t lost since Aug. 11, and only Clayton Kershaw of the Dodgers, at 21 starts, has a longer active unbeaten streak. Morton struck out eight with no walks and needed just 83 pitches to complete seven innings.

Austin Meadows tripled and scored on a throwing error in the third to open the scoring. Tampa Bay scored two more runs in the fifth and snapped its four-game losing streak.

Michael Conforto and Adeiny Hechavarría each had a solo homer for the Mets, who ended a three-game skid with their second win in seven games.

Canó played for the first time since straining his left quadriceps May 22 but was pulled at the start of the fifth inning with tightness in the muscle. He favored the leg running to first base on a rally-killing double play in the third.

Vargas (2-3) has allowed one run or fewer in seven of his past eight starts. The 36-year-old lefty struck out a season-best eight, allowed five hits and a walk, and threw 117 pitches.

PHOENIX (AP) — Jarrod Dyson hit a tying double in the eighth inning with the help of Chase Field’s new artificial turf, David Peralta had a winning single in the 11th, and Arizona avoided a three-game sweep.

The two-time defending NL champion Dodgers entered with a season-high, seven-game winning streak and began the day 10 1/2 games ahead of second-place Colorado in the NL West and 13 games in front of the Diamondbacks. The Dodgers, an NL-best 43-20, lost for just the second time in 13 games.

Eduardo Escobar tripled off Scott Alexander (3-2) leading off the 11th, Ketel Marte was intentionally walked, and Peralta lined his first pitch to right.

SAN DIEGO (AP) — Adam Haseley drove in the go-ahead run in the eighth inning with his first big league hit, and Philadelphia rallied from a three-run deficit.

The 23-year-old Haseley made his major league debut Tuesday as the center fielder for the NL East-leading Phillies, who are scrambling to reconfigure their outfield.

Craig Stammen (4-2) walked Scott Kingery with two outs in the eighth, and Haseley sliced a sinker for an opposite-field double down the left-field line. Pinch-hitter Andrew Knapp followed with an RBI single for Philadelphia, which won its second straight after a season-high five-game losing streak.

Jay Bruce hit a solo homer in the fourth, his third with the Phillies and 17th this season.

Juan Nicasio (1-2) retired Wil Myers on a comebacker that ended the seventh. Neris got five outs for his 12th save in 14 chances.

Leury Garcia singled with one out in the eighth off Kyle Barraclough, and José Abreu hit his 16th homer one out later. Wander Suero relieved and Welington Castillo homered on his first pitch.

Washington’s 12th blown save tied Pittsburgh for second-most behind the New York Mets’ 14.

Colomé (2-1) entered in the bottom of the ninth and walked Brian Dozier on four pitches. He fell behind Turner 2-0, and Turner drove a high full-count fastball into the left-field bullpen for his third game-ending home run, his second this season.

Sean Doolittle (4-1) pitched out of two-on, one-out trouble in the ninth, striking out Garcia and Moncada.

Starlin Castro and Bryan Holaday each drove in two runs as the surging Marlins earned their fourth straight victory. Sandy Alcántara (3-5) pitched seven crisp innings in his first win since he tossed a two-hitter in a 3-0 victory over the New York Mets on May 19.

Nelson — out since Sept. 8, 2017, when he injured his pitching shoulder diving back to first after rounding the base on a single — lasted just three innings. He was charged with five runs and four hits. He struck out two and walked three.

The Marlins, who have won 13 of 18 overall, went ahead to stay in the third on Anderson’s homer.

Toronto trailed 7-4 in the seventh but closed against Jonathan Holder on a two-run, two-out double by Teoscar Hernández.

Brandon Drury and Grichuk combined for back-to-back homers against Luis Cessa in the eighth. New York has lost the first two games of a three-game set, ending a streak of nine consecutive series wins. New York has not won 10 series in a row since 1954.

Guerrero’s home run off on a sinker by Britton (2-1) was the seventh for the 20-year-old, who debuted April 26.

Sale’s dominant performance was summed up by the eighth inning, when the seven-time All-Star struck out the side on nine pitches — his second immaculate inning of the year. Sale (2-7) has rebounded from a dismal April to put together a series of solid starts. He finished with 12 strikeouts and no walks, his seventh double-digit strikeout game of the season.

Bradley hit a three-run double during a four-run fifth that broke open the game, and Devers tacked on his ninth homer after a pair of RBIs earlier in the night.

Jakob Junis (4-6) gave up six runs and eight hits with three walks over 4 2/3 innings. He struck out five.

Bote had four hits, including a three-run homer and bases-clearing double to hand the Rockies a second straight loss after ending their season-high eight-game winning streak Tuesday.

His homer in the fifth staked Chicago and Yu Darvish to a 3-0 lead. Bote keyed a five-run rally in the sixth with his double to the left field corner that put Chicago up 8-3. He singled in a needed insurance run with two outs in the eighth to make it 9-7 after Colorado had trimmed the Cubs’ lead to a run.

Nolan Arenado drove in a run with a single in sixth to extend his hitting streak to 15 games.

Brandon Kintzler (2-0), the second of six Chicago relievers, got the final two outs of the sixth for the win. Steve Cishek allowed a run in the ninth before earning his sixth save in eight chances.

PITTSBURGH (AP) — Joe Musgrove gave Pittsburgh’s beleaguered bullpen a welcome break, pitching into the ninth inning for the first time in his career as the Pirates beat Atlanta in a game delayed more than two hours by rain.

Musgrove (4-6) bounced back from a pair of bumpy starts to overwhelm the Braves and help Pittsburgh end a three-game skid. The right-hander retired 14 straight and struck out six without issuing a walk.

He took the mound in the ninth looking for his first complete game, but was pulled for closer Felipe Vázquez after giving up back-to-back home runs to Ronald Acuña Jr. and Dansby Swanson. Vázquez allowed an RBI double to Nick Markakis but avoided major damage as the Pirates won for just the fifth time in 16 games.

Elias Diaz hit his first home run of the season for Pittsburgh. Colin Moran added his seventh for the Pirates, who touched Atlanta starter Kevin Gausman (2-5) for seven runs.

ARLINGTON, Texas (AP) — Delino DeShields’ single in the 12th inning, his fourth hit of the game, drove in pinch-runner Isiah Kiner-Falefa from second base to lift Texas.

DeShields singled off Paul Fry (0-3), who entered in the 11th. Kiner-Falefa ran for Asdrúbal Cabrera, who led off the 12th with a single to left field. Kiner-Falefa advanced to second when Shin-Soo Choo was hit by a pitch and scored on DeShields’ hit.

The Rangers were two outs from a 1-0 win when rookie Richie Martin homered to left field, his second of the season, to hand Shawn Kelley his third blown save of the season.

CLEVELAND (AP) — Roberto Pérez hit a solo homer in the seventh inning to drive in the go-ahead run and Cleveland Indians used seven relief pitchers after announcing scheduled starter Carlos Carrasco will be sidelined indefinitely because of a recently diagnosed blood condition.

Carrasco had been feeling lethargic for weeks and was placed on the 10-day injured list. The Indians gave no specifics on Carrasco’s disorder, but said they expect him to return at some point this season.

Jordan Luplow’s two-run homer in the seventh off Blake Parker (0-2) tied the game for Cleveland, which came back from a 5-1 deficit. Pérez homered two batters later.

Francisco Lindor homered in the eighth — his third in two games. Luplow had an RBI double in the sixth while José Ramirez, mired in a season-long slump, drove in three runs.

The Indians, knowing they would need a deep bullpen to get through the game, began the night with 10 relievers. Nick Wittgren (3-0) allowed a run in the seventh while Brad Hand pitched the ninth for his 18th save in 18 chances.

Seattle won for just the fourth time in 20 games thanks to five homers and an outstanding performance from Leake (5-6).

Houston’s five-game winning streak was snapped with its most lopsided defeat since a 17-2 loss to Detroit in May 2013.

Domingo Santana and Tom Murphy also homered in the sixth. Mallex Smith had a key two-out, two-run single in the fifth off Houston starter Brad Peacock (5-3).

Leake’s six-hitter on 119 pitches was the first complete game this season for Seattle and the fifth of his career, the last coming on Sept. 30, 2015, with San Francisco. Leake rebounded from a shaky first inning and struck out five. He allowed just four baserunners after the first.

Mac Williamson and Kyle Seager also homered for the Mariners in a five-run eighth.

The Athletics were up 7-1 after 2½ innings before the Angels rallied to take an 8-7 lead in the fourth. Oakland regained the lead with two in the eighth when Matt Olson hit an RBI single and Matt Chapman scored on a wild pitch by winner Hansel Robles (3-0). Chapman was originally ruled out at the plate but the call was overturned following a replay review.

The Angels tied it at 9 when Ryan Buchter walked Shohei Ohtani with the bases loaded in the eighth.

Robbie Grossman tied a career best with four hits for Oakland and made a diving catch in left field in the eighth. Marcus Semien had three hits and three RBIs. 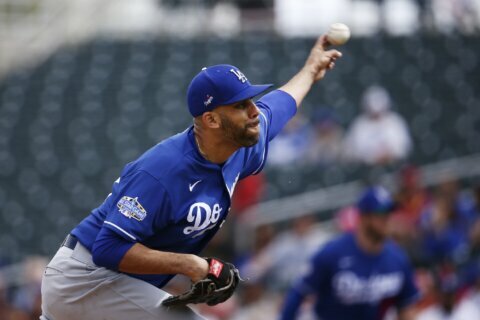 Dodgers pitcher Price won’t play this year because of virus 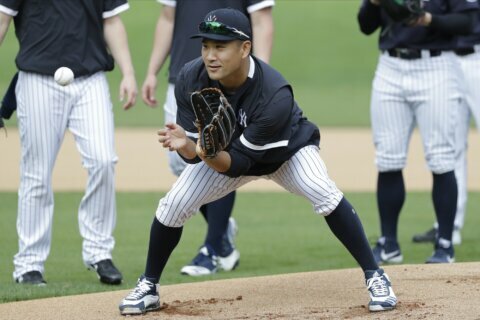 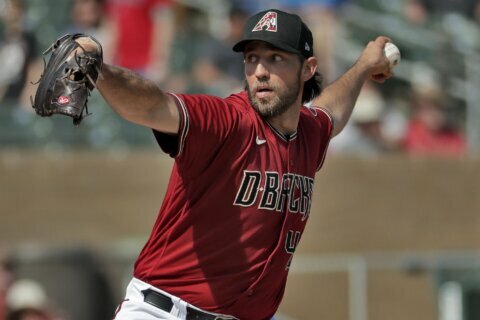 D-backs’ MadBum back on mound, tries to stay healthy in camp