A look at what’s happening around the majors today: WELCOME Zac Gallen is set to make his major league debut…

Gallen might see some familiar faces at Busch Stadium. He was traded by the Cardinals to Miami in the deal for outfielder Marcell Ozuna after the 2017 season.

Alex Bregman and the Astros have lost a season-most four straight as they open a four-game series between AL division leaders at Yankee Stadium.

Houston was swept in Cincinnati this week, but former AL MVP Jose Altuve returned to the lineup after missing 35 games with a hamstring strain. He went 0 for 4 and grounded into a double play Wednesday.

Big-hitting Gary Sánchez and the Yankees have won five in a row, capped by a sweep of the second-place Rays. Slugging outfielder Aaron Judge is expected to rejoin New York on Friday after being sidelined in late April by a strained left oblique.

Swept in a doubleheader Wednesday at Washington, the Phillies try to rebound in the series finale behind Aaron Nola (6-1, 4.89 ERA). The right-hander has hit a rough patch lately, going 0-1 with a 7.71 ERA in three starts this month. The Nationals changed pitching plans, bumping Stephen Strasburg to Friday against the Braves. Erick Fedde (1-1, 3.68) will start instead. After losing three straight and seven of 10, Philadelphia is suddenly four games behind first-place Atlanta in the NL East.

Rockies shortstop Trevor Story is scheduled for an MRI after jamming his right thumb on a headfirst slide into second base Wednesday night. Colorado manager Bud Black said X-rays were negative. “I’m always nervous if you have to go get an MRI,” said Story, who leads the majors with 65 runs and is one of two players with at least 15 homers and 10 steals. “You never know.” … Dodgers pitcher Rich Hill also will get an MRI. He left Wednesday’s outing after one inning because of left forearm discomfort. He said he had elbow tightness in his two previous starts and “everything tightened up” after his third warmup pitch before the second inning. “I didn’t feel it would be a wise move to continue,” Hill said. “The MRI will probably show something, but I don’t think it will be in the concerning category.”

Julio Urias (3-2, 3.05 ERA) comes out of the Dodgers’ bullpen to make a spot start in place of Walker Buehler, who gets extra rest. Urias hasn’t pitched longer than three innings since April 18.

The Dodgers (50-25) became the first 50-win team in the majors Wednesday night and improved to a big league-best 30-9 at home. The NL West leaders are tied with the 1977 club for the second-best start in Los Angeles history. It’s the first time since that year the team has compiled 50 wins by its 75th game.

The Orioles have dropped a season-high eight in a row and have the worst record in the majors at 21-53. They’ll try to break the skid when Dylan Bundy (3-8, 4.44 ERA) pitches at Seattle — he’s made it past six innings only twice in 14 starts this year. 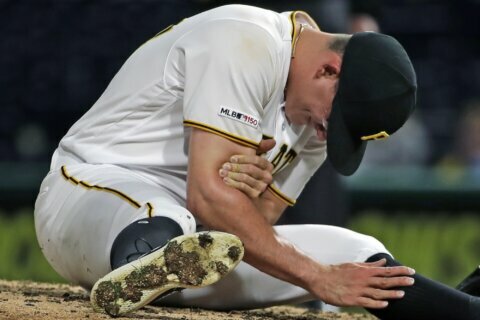 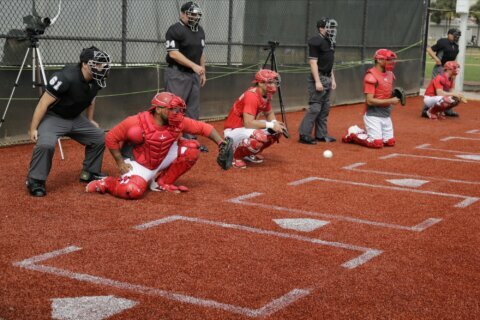