It’s just the kind of game Torey Lovullo likes from the Diamondbacks, helping him become the second-fastest manager in team history to reach 200 wins.

Eduardo Escobar hit a three-run triple and David Peralta homered, lifting the Diamondbacks to a 7-0 win over the San Francisco Giants on Friday night.

“Two hundred wins is something I’m very proud of, but the players are more responsible for that than I am,” Lovullo said.

The Diamondbacks used Lovullo’s blueprint to get him to the milestone, getting good pitching early and building quality at-bats as the game progressed.

Peralta hit a solo homer off Jeff Samardzija (2-2) and Escobar cleared the bases with a slicing triple against Derek Holland in the seventh.

Adam Jones had a run-scoring double among his three hits and three relievers combined with Merrill Kelly (4-4) for Arizona’s third shutout of the season.

The right-hander allowed 10 combined earned runs his previous two outings, but was effective against the Giants until running into trouble in the sixth inning.

San Francisco loaded the bases to with one out to chase the right-hander, but Yoshihisa Hirano struck out Brandon Crawford and got Kevin Pillar to fly out to right.

“He was using his defense,” Jones said. “That’s what we’re there for and he was pounding the strike zone.”

The first inning has been a struggle for Samardzija this season. He has a 12.38 ERA in the opening frame and allowed a majors-most six first-inning homers.

The right-hander made it through the first inning unscathed and held the Diamondbacks in check until Peralta lifted a solo homer to left-center in the fourth inning.

Jones chased Samardzija with a run-scoring double and Ketel Marte put Arizona up 3-0 with a broken-bat RBI single off Reyes Moronta.

Samardzija allowed three runs on five hits and walked three in 5 1/3 innings. He did not strike out a batter for the first time in 101 career starts.

“They are aggressive out there,” Samardzija said. “I thought we were making good pitches, which kind of created the atmosphere that it did, just kind of moving along there.”

Bochy was ejected in the seventh inning for arguing a call after Jarod Dyson was hit on the hand attempting a bunt.

Bochy walked out of the dugout while trainers attended to Dyson and home plate umpire Andy Fletcher gave him an almost nonchalant ejection.

“They say he pulled back. He attempted to bunt the ball, not the right call there,” Bochy said after his third ejection of his final season before retiring. “I don’t know how much it played into the game, but the call was not right. He was attempting to bunt that ball.”

Giants: C Buster Posey went 2 for 4 after being activated from the seven-day concussion list. He had been out since May 10, two days after taking a foul tip off the mask. … 3B Evan Longoria was sick and out of the lineup.

Diamondbacks: RHP Zack Greinke will throw a bullpen session on Saturday after an MRI on Friday came back clean. He left Wednesday’s start with abdominal tightness. The Diamondbacks will assess Greinke after his bullpen to determine whether he can start on Tuesday. … RHP Taijuan Walker suffered a setback in his comeback from Tommy John surgery, suffering a right shoulder capsule sprain during rehab. He received an injection and will not throw for six weeks. … Dyson remained in the game after being hit, but later came out. X-rays were negative and Lovullo said he should be available on Saturday.

Giants LHP Madison Bumgarner, Saturday’s starter against Arizona, went 1-1 with a 1.50 ERA against the Diamondbacks last season. RHP Zack Godley will make the start for the Diamondbacks after returning from the bullpen. 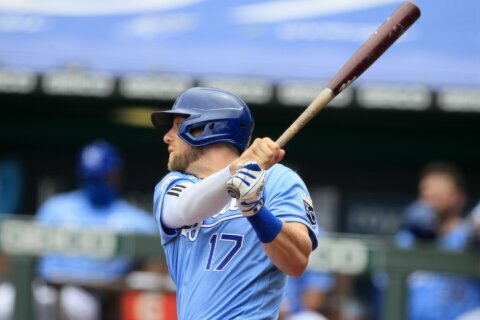 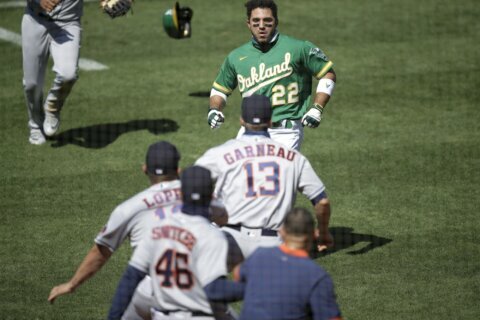 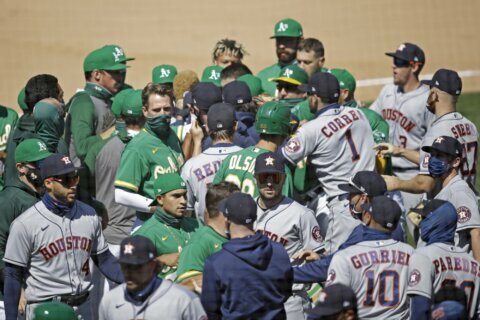