ST. PETERSBURG, Fla. (AP) — Clayton Kershaw took a shutout into the seventh inning in his first start at Tropicana Field and the Los Angeles Dodgers beat the Tampa Bay Rays 7-3 on Tuesday night.

The Dodgers, with the National League’s best record at 32-17, have won six of seven. Tampa Bay dropped two games behind the AL East-leading New York Yankees.

Kershaw had scattered four hits through six but was replaced by Pedro Baez with two on and one out in the seventh and Los Angeles up 6-0.

The Rays then got within 6-3 on a run-scoring single by Austin Meadows and Tommy Pham’s RBI double off Scott Alexander.

HOUSTON (AP) — Justin Verlander took a no-hitter into the seventh inning and struck out a season-high 12 to lead Houston over Chicago.

Verlander (8-1) allowed one hit and walked one in eight innings for his fourth straight win and the seventh in eight starts. The only hit off him came when Jose Abreu sent the first pitch of his at-bat just over the wall and out of reach of a leaping Jake Marisnick in straightaway center field with one out in the seventh to cut the lead to 5-1.

Yuli Gurriel hit a solo homer off Dylan Covey (0-3) in the fourth inning to give the Astros home runs in 18 straight games, tying the second-longest streak in franchise history.

New York made it easy for Domingo Germán (9-1) to win his sixth consecutive start and increase his major league-leading victory total. The right-hander pitched only five innings and left with a 9-3 lead.

David Hale worked the four innings to earn his first save since 2010 at Class A.

DJ LeMahieu had three hits and Sánchez finished with four RBIs for the AL East leaders, who have won seven of eight.

Sánchez got it started, hitting his second three-run homer in as many nights before David Hess (1-6) got an out.

Stevie Wilkerson hit a three-run homer for the Orioles, who have lost 10 and 12 and dropped to an AL-worst 15-33.

Toronto won for just the fifth time against Boston at Rogers Centre since the start of the 2017 season.

Vladimir Guerrero Jr. returned to the Toronto lineup, going 2 for 5 with a pair of runs. Brandon Drury was 2 for 3 with three RBIs. The 10 runs tied a season high.

Mitch Moreland, Rafael Devers and Jackie Bradley Jr. all had solo shots for the Red Sox.

That was the only success Detroit had against the Miami bullpen, though. Nick Anderson (1-1) struck out the side in the 10th, then closed the Tigers out in the 11th for his first career win.

Wallach put the Marlins ahead in the 11th with a two-out drive to left-center field off Joe Jimenez (2-2). The Tigers have dropped seven in a row.

JaCoby Jones hit a solo homer for the Tigers in the third, but Harold Ramirez — playing his sixth major league game — answered with his solo home run an inning later.

Brandon Crawford began the comeback with a one-out single. With two out, Kevin Pillar singled in Crawford. Pillar stole second, and moved to third on Pablo Sandoval’s pinch-hit infield single. Pinch-runner Mac Williamson stole second before Panik slapped a 3-2 pitch from Jackson into right field to cap the three-run rally.

It’s the fourth blown save this season for Jackson (2-1). Atlanta had won four straight against San Francisco and allowed one run in all four.

Braves starter Julio Teheran struck out six and gave up three hits and one run in 5 2/3 innings.

Edwin Díaz (1-2) worked around a ninth-inning single for his first win with the Mets. Washington lost its third straight.

Márquez (5-2) gave up three hits, walked one and didn’t allow a runner to third base as the Rockies snapped a four-game losing streak.

Charlie Blackmon went 3 for 5 for Colorado, including a two-run triple to left off Chris Archer (1-4) in the fourth. Story homered for the second straight game. His shot to deep left field in the third inning glanced off the glove of Pittsburgh leftfielder Bryan Reynolds.

Archer gave up four runs, three earned, in five innings, with two walks and three strikeouts as his ERA ticked down to 5.55. He needed 92 pitches to get 15 outs. Márquez, meanwhile, needed 104 pitches to get through eight full innings.

Jurickson Profar homered in the eighth as Oakland improved to 7-1 against AL Central teams this season. The A’s are 59-20 vs. Cleveland, Chicago, Minnesota, Detroit and Kansas City dating to Aug. 23, 2016.

MILWAUKEE (AP) — Sonny Gray and three Cincinnati relievers held down Milwaukee, which was missing Christian Yelich because of back spasms.

It was the major league-leading seventh shutout for the Reds as the Brewers were blanked for the first time this season.

Cincinnati scored all three runs in the first inning. Nick Senzel scored on a wild pitch, Phillip Ervin pushed a run across with a double and scored on a fielder’s choice.

Gray (1-4) earned his first win of the season with six shutout innings in his first appearance at Miller Park. Gray tied his season-high with nine strikeouts. Raisel Iglesias earned his 10th save.

Lynn (6-3) gave up five singles and one walk and had a season-high 11 strikeouts and one walk in his 200th career start. Kelley, who was activated from the 10-day injured list on Tuesday, allowed a ninth-inning homer to Omar Narváez, who had three hits, in earning his third save of the season.

Nomar Mazara had three hits, an RBI and scored one of two runs on a sacrifice fly after initially being ruled out at the plate before a successful Texas challenge. Joey Gallo hit a two-run home run, his 15th of the season, in the eighth inning.

Greinke (6-2), who recorded his 2,500th career strikeout in the fourth, was working on a one-hit shutout when he ran into trouble in the sixth. Ian Kinsler singled with one out, advanced on Franmil Reyes’ groundout and scored on Manny Machado’s single. Hosmer then drove Greinke’s next pitch to left field to give the Padres the lead. It was Hosmer’s seventh.

The Padres won their second straight to pop back above .500. The Diamondbacks lost their fourth straight.

Left-hander Matt Strahm (2-3) allowed two solo homers among his four hits in six innings. He struck out two and walked none.

Kirby Yates struck out the side in the ninth for his 19th save.

Eduardo Escobar and John Ryan Murphy homered for the Diamondbacks.

Kris Bryant had three hits for the Cubs and scored two runs.

Phillies slugger Bryce Harper went 0 for 4, dropping his average to .224, and failed to reach base at Wrigley Field for the first time in 19 games. Jean Segura doubled in the first to extend his hitting streak to 12 games.

Bryant scored when Albert Almora Jr. hit a chopper toward first, and Nicasio’s underhand toss to catcher J.T. Realmuto was late, a call upheld by a video review. Báez, who didn’t start for the second straight game because of a jammed right heel, lined Nicasio’s first pitch to right over a drawn-in infield.

Gonzalez’s two-run shot in the sixth tied the game at three. Minnesota then broke it open with four in the seventh off Luke Bard (1-2). AL batting leader Jorge Polanco and Eddie Rosario each had two hits and drove in two runs for the Twins, who have won five of six on their road trip.

Luis Arraez had two hits, including his first home run in the eighth. Max Kepler also had two hits.

Minnesota’s Michael Pineda (4-3) allowed three runs the first two innings but only one hit in his final four innings of work.

David Fletcher had three hits for Los Angeles, which has dropped three straight. Mike Trout hit his 11th home run , a solo shot to left in the first inning off Pineda’s fastball. 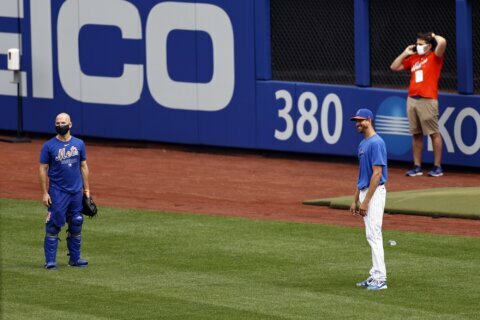 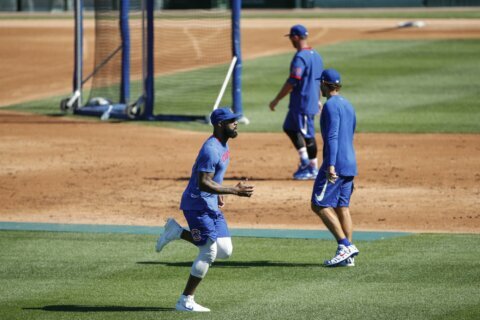 Cubs, Ross get back to work as workouts resume in baseball 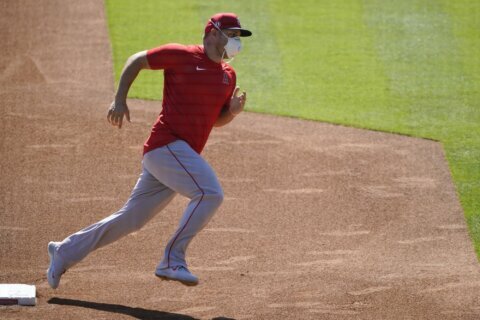 Trout uncertain, All-Star Game off as MLB gets back on field