BEIRUT (AP) — President Joe Biden said Wednesday the U.S. is certain that the Syrian government is holding American journalist Austin Tice, who went missing in the war-torn country a decade ago. He urged Damascus to help bring Tice back home.

Biden’s comments came in a statement released by the White House to mark the 10th anniversary of Tice’s abduction, which took place when he was in Syria covering its now lengthy conflict. They were the clearest indication so far that the U.S. is certain Tice is being held by the government of President Bashar Assad.

Tice went missing shortly after his 31st birthday on Aug. 14, 2012 at a checkpoint in a contested area west of the capital Damascus. A video released a month later showed him blindfolded and held by armed men, saying “Oh, Jesus.” He has not been heard from since.

“We know with certainty that he has been held by the Government of Syria,” Biden said in the statement adding that “we have repeatedly asked the government of Syria to work with us so that we can bring Austin home.”

“On the tenth anniversary of his abduction, I am calling on Syria to end this and help us bring him home,” Biden said. He added there “is no higher priority in my Administration than the recovery and return of Americans held hostage or wrongfully detained abroad.”

Four years ago, then-U.S. envoy to Syria, James Jeffrey, said Tice is believed to be alive and held hostage in Syria. He didn’t say why officials believe this or who might be holding him.

In May, top Lebanese security official Maj. Gen. Abbas Ibrahim met with U.S. officials in Washington as part of mediation efforts between the U.S. and Syria for Tice’s release. Ibrahim, the chief of Lebanon’s General Security Directorate, has mediated complicated hostage releases in the past.

Tice is one of two Americans who went missing in Syria. The other is Majd Kamalmaz, a psychologist from Virginia, who vanished in Syria in 2017.

U.S. Secretary of State Antony Blinken also said in a statement that “we will continue to pursue all available avenues to bring Austin home and work tirelessly until we succeed in doing so.”

Blinken said Special Presidential Envoy for Hostage Affairs Roger Carstens will continue to engage with the Syrian government in close coordination with the White House, the Hostage Recovery Fusion Cell, and the State Department.

In 2016, then- Syrian Deputy Foreign Minister Faisal Mekdad told The Associated Press that “Austin Tice is not in the hands of Syrian authorities and we don’t have any information about him at all.” Mekdad is currently Syria’s foreign minister.

In May, Biden met Tice’s parents and reiterated his commitment to continue to work through all available avenues to secure “Austin’s long overdue return to his family.”

Tice is from Houston and his work had been published by The Washington Post, McClatchy newspapers and other outlets. He went to Syria to cover the conflict that started in 2011 and has since left hundreds of thousands dead and nearly half the pre-war population of 23 million displaced. More than 5 million of the displaced are refugees outside the country.

In the final months of the Trump administration, two U.S. officials — including the government’s top hostage negotiator, Carstens — made a secret visit to Damascus to seek information on Tice and other Americans who have disappeared in Syria. It was the highest-level talk in years between the U.S. and Assad’s government, though Syrian officials offered no meaningful information on Tice.

“The Tice family deserves answers, and more importantly, they deserve to be swiftly reunited with Austin,” Biden said. 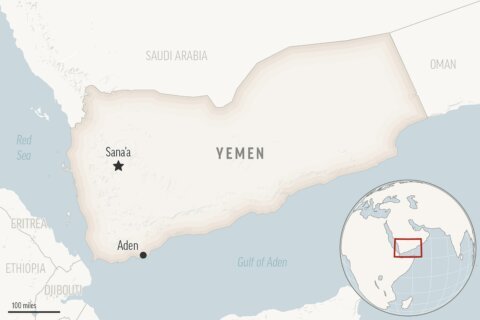