TEHRAN, Iran (AP) — Millions of Shiite Muslims — from Iran to Afghanistan and Pakistan — were marking the festival of Ashoura on Monday, one of the most emotional occasions in their religious calendar, commemorating the 7th century martyrdom of the Prophet Muhammad’s grandson Hussein.

Security forces, particularly in Taliban-run Afghanistan, were on high alert for any violence. In the past, bloody attacks have marred the festival across in the Middle East, as Sunni extremists who view the Shiites as heretics seize on the holy day to target large gatherings of mourners.

Shiite Muslims were to mark the holy day on Tuesday in Iraq and also in Lebanon, where a major procession typically shuts down Beirut’s biggest suburb. With power split in Lebanon among the country’s religious sects, Ashoura presents an opportunity for Lebanon’s Shiites to show force.

In the Iraqi city of Karbala, where Hussein is entombed in a gold-domed shrine, religious charities laid out vats of rice, bread and beans to feed the pilgrims. Thousands typically rush toward the shrine to symbolize their desire to answer Hussein’s last cries for help in battle.

Crowds of mourners were thin in Kabul, where the country’s Shiites have suffered a wave of brazen attacks by the local Islamic State affiliate, which has tried to undermine the new Taliban government. Repeated bombings have rattled Afghanistan’s ethnic minority Hazara Shiites, who previously experienced persecution under the Taliban and fear their new rulers — who seized power a year ago, as U.S. and NATO troops withdrew — will let violence continue against their community.

Shiites represent over 10% of the world’s 1.8 billion Muslims and view Hussein as the rightful successor to the Prophet Muhammad. Hussein’s death in battle at the hands of Sunnis at Karbala, south of Baghdad, ingrained a deep rift in Islam and continues to this day to play a key role in shaping Shiite identity.

Over 1,340 years after Hussein’s martyrdom, Baghdad, Tehran, Islamabad and other major capitals in the Middle East were adorned with symbols of Shiite piety and repentance: red flags for Hussein’s blood, symbolic black funeral tents and black dress for mourning, processions of men and boys expressing fervor in the ritual of chest beating and self-flagellation with chains.

Pakistani police were out in force along procession routes. The Taliban shut down roads leading to Shiite neighborhoods and mosques in Afghanistan.

The Taliban have encouraged Shiites to carry out their devotions. However, they did not designate Ashoura a national holiday this year, as Afghanistan’s authorities have in the past. They also banned major processions for fear of violence after a string of bombings targeting Shiite-dominated areas.

Despite the threat of attacks, hundreds of frenzied Shiites turned up on the streets of Kabul to beat their heads and chests in unison. They whipped themselves with knife-edged chains to the point of blood splattering onto the streets.

“Those who want to stop us from commemoration of this day will take their wish to grave with themselves,” said Habibullah Bashardost, adding that the community had braced itself for more violence.

“Even if these people who are commemorating today are martyred, we have our coming generation to continue this path,” Bashardost said.

Another participant, Ahmadullah Hussaini, said his presence at the bloodletting ritual under the shadow of targeted attacks delivered a succinct message: “We are not scared of anything, not even death.”

In Shiite powerhouse Iran, thousands of men and women shrouded in black thronged the streets of Tehran. Green plumage, the color of Islam, fluttered in the air. Camels covered with multicolored cloth paraded through the city, evoking how Hussein set out from Mecca with a small band of companions. Iranians pounded their chests in mourning and chanted in unison, while some mourners clad in black wept.

“Somehow, I feel like I must go to mourning, because Imam Hussein was brutally and unfairly treated,” said Nasrin Bahami, a 65-year-old participant in the Tehran procession. “I love his pride, his bravery. He is a symbol, a role model.”

In Iraq, where the largest Ashoura gatherings were expected to take place on Tuesday, black flags of grief fluttered over the capital’s major thoroughfares. Portraits of the revered saint hung from the doors of nearly every house in the Shiite-dominated suburb of Sadr City.

This year’s Ashoura in Iraq coincides with a deepening political crisis between Shiite political rivals. Thousands of followers of cleric Muqtada al-Sadr stormed the parliament building last week to prevent Iran-backed parties from forming a government. Their sit-in continues, with al-Sadr invoking the sacrifices of Hussein to whip up religious fervor. 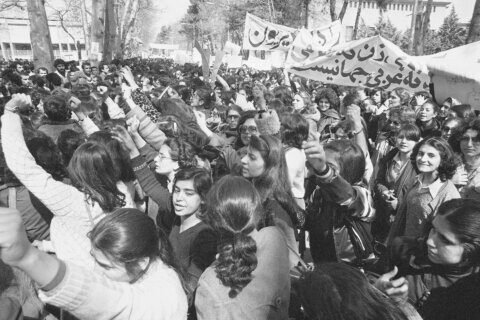