BEIRUT (AP) — An underwater craft ended its search mission off Lebanon after locating a boat carrying migrants that sank earlier this year in the Mediterranean Sea, but bigger equipment is needed to pull it out, a legislator said Monday.

The comments by legislator Ashraf Rifi came days after the submarine found the remains of at least 10 migrants who drowned when their boat sank in April off northern Lebanon with about 30 people on board.

The boat had carried dozens of Lebanese, Syrians and Palestinians trying to migrate by sea to Italy. It went down more than five kilometers (three miles) from the port of Tripoli, following a confrontation with the Lebanese navy.

Ten bodies were recovered that night, including one of a child, while 48 survivors were pulled from the Mediterranean. According to navy estimates, 30 people were believed to have gone down with the boat.

“The first part of the mission has been completed when the boat was located,” Rifi said in comments carried by the state-run National News Agency. He added that to pull out the boat, bigger and more powerful equipment is needed and the government should continue the mission.

A week ago, the small, three-person underwater craft — a Pisces VI submarine — began searching for the remains. The wreck was located on Wednesday, at a depth of some 450 meters (about 1,470 feet).

The circumstances of the vessel’s sinking are disputed. Survivors say their boat was rammed by the Lebanese navy, while the military claims the migrants’ boat collided with a navy vessel while trying to get away.

The April sinking was the greatest migrant tragedy for Lebanon in recent years and put the government further on the defensive at a time when the country is in economic free fall and public trust in the state and its institutions is rapidly crumbling.

Lebanon has a population of 6 million, including 1 million Syrian refugees, and has been in the grip of a severe economic meltdown since late 2019.

Once a country that received refugees, Lebanon has become a launching pad for dangerous migration by sea to Europe. 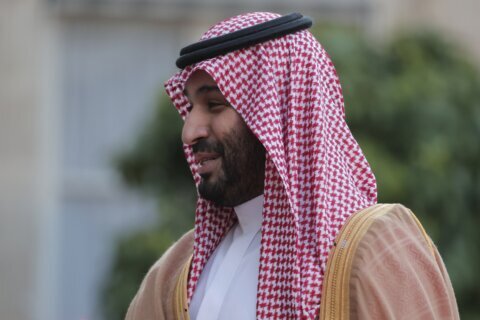