BEIRUT (AP) — The leader of Lebanon’s militant Hezbollah group threatened Israel with military escalation Wednesday if a future deal over the disputed maritime border between the two countries is not in Lebanon’s favor.

Sayyed Hassan Narallah said in a televised speech that Lebanon should be able to extract oil and gas in Lebanese waters. He warned that sending unarmed drones over the Karish gas field in the Mediterranean earlier this month was “a modest beginning to where the situation could be heading.”

On July 2, the Israeli military said it shot down three drones before Hezbollah issued a statement saying they were unarmed and were sent on a reconnaissance mission. “The mission was accomplished and the message was received,” a Hezbollah statement said at the time.

Israel and Hezbollah are bitter enemies that fought a monthlong war in the summer of 2006. Israel considers the Iranian-backed Lebanese group its most serious immediate threat, estimating it has some 150,000 rockets and missiles aimed at Israel.

“The message of the drones meant that we are serious and we are not after a psychological war but we are gradually moving in our steps,” Nasrallah said, adding that Lebanese officials should take advantage of his group’s strength to use it in indirect talks.

Nasrallah added that “whatever we are supposed to do, we will without any hesitation. This message was understood by the Israelis and by the Americans.”

Nasrallah’s refused to comment on the Lebanese caretaker prime minister’s criticism of Hezbollah for sending the drones. Najib Mikati said at the time it was an unnecessarily risky action.

“Whether our message was understood in Lebanon or not, we don’t care about that. What is important for us is that the enemy gets the message,” he said.

Nasrallah’s comments came hours after President Joe Biden arrived in Israel at the start of his first visit to the Middle East as president.

Negotiations between Lebanon and Israel to determine their maritime borders commenced in October 2020, when the two sides held indirect U.S.-mediated talks in southern Lebanon. Since taking over the mediation from late 2021, Hochstein has resorted to shuttle diplomacy with visits to both Beirut and Jerusalem.

Nasrallah said it was the first time that Hezbollah sent three drones at the same time adding that when the Israeli forces opened fire near Karish it was a message to engineers at the facility that this is not a safe area.

Nasrallah said that besides the drones, Hezbollah has other capabilities in the air and by sea and “all the options are on the table.”

“If we go to war, we might impose our conditions on the enemy,” Nasrallah said, adding that if the Americans “don’t give us our rights that are demanded by the state and if you don’t allow companies to extract (oil) God knows what we will do. We will turn over the table in the face of the world.”

Israel and Lebanon, which have been officially at war since Israel’s creation in 1948, both claim some 860 square kilometers (330 square miles) of the Mediterranean Sea. Lebanon hopes to exploit offshore gas reserves as it grapples with the worst economic crisis in its modern history. 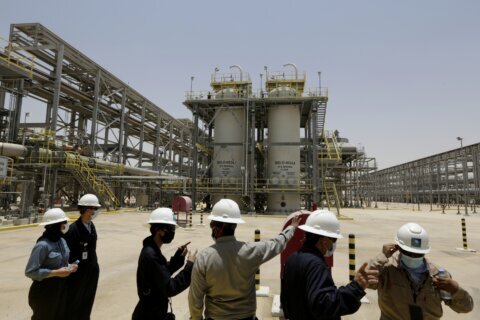