BEIRUT (AP) — Rita Qadan’s heart skips a beat whenever talks about how she survived the devastating explosion in Beirut’s Port two years ago. And every time she sees the massive port silos, she is reminded again of her trauma.

The port’s grain silos destroyed in the blast — a massive, charred ruin jutting into the sky — has been burning for weeks after remnants of the grains that withstood the 2020 explosion started fermenting and ignited in the summer heat. The Lebanese government said last week the fire expanded after flames reached nearby electrical cables. Experts warn the structure could collapse at any time.

On that fateful Aug. 4, 2020, hundreds of tons of explosive ammonium nitrate improperly stored in the port for years, detonated, killing more than 200 people injuring over 6,000. Entire parts of the city around the port were destroyed in the blast, and the tragedy became a searing trauma on the psyche of the entire Lebanese population.

Today, Qadan still works as a concierge at a building in Beirut’s Mar Mikhael neighborhood, where she has lived for decades, her small apartment tucked in the corner of the ground floor.

The area along Beirut’s waterfront has a direct view of the port and the smoldering silos. The smoke brings back horrible memories, Qadan says as she waters her plants.

The stench, seeping into her modest two-room apartment, is dizzying, she says. “I just wear my mask and stay indoors,” Qadan told The Associated Press, her voice trembling. “I’m really scared that they could fall.”

Emmanuel Durand, a French civil engineer who volunteered for the government-commissioned team of experts, says the north block’s collapse in the port is inevitable and just a matter of time.

In Geneva, he has been monitoring the tilting silos from thousands of miles away using data produced by sensors he installed over a year ago, and updating a team of Lebanese government and security officials on the developments in a WhatsApp group.

Even before the fire, the northern block was on its last legs. “The fire is just finishing it off,” he said.

Durand first visited Beirut as a volunteer two weeks after the 2020 explosion, assessing damaged buildings with engineering students. He had no idea the port silos would later come occupy so much of his free time.

“I’m very wired with that particular site and with the country,” he said. “All this has been an emotional experience, but as long as nobody gets killed, I’ll be okay.”

From work, Mohammad Daife can also see the Beirut port silos. Daife, whose family-run company provides customs assistance to shipping clients, said he remained in shock for three months after the blast.

He closes his windows and keeps the air conditioner running to avoid the stench “We are very disturbed … something could happen to our employees and families,” Daife said. “I don’t know what the government will do, but I hope they make a decision so this can end.”

Johnny Assaf can also see the silos from his small real estate agency. In the explosion, shards of glass from the windows pierced his back — one piece still hasn’t been removed.

“Our fear is that it tips over, because we don’t what could happen to us if it did,” he said.

The Lebanese health and environment ministries on Monday urged residents in the area to close their windows and wear facemasks, offering instructions on how to clean dust from their cars and homes should the silos fall. But the residents are still fearful.

“My friends are leaving the area,” Assaf explained. “But there are people with nowhere else to go.” 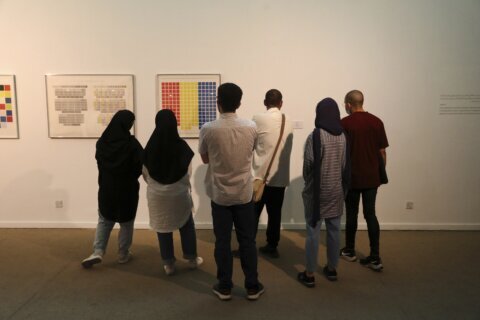