DAMASCUS, Syria (AP) — Syria said Wednesday it will recognize the “independence and sovereignty” of Ukraine’s eastern Luhansk and Donetsk regions and contacts will be established to set up diplomatic relations.

The Syrian Foreign Ministry announcement came days after President Bashar Assad met with a joint delegation from both regions in Damascus.

Earlier this month, Russia claimed to have taken control of 97% of one of the two provinces that make up Ukraine’s Donbas, bringing the Kremlin closer to its goal of fully capturing the eastern industrial heartland of coal mines and factories.

Russian Defense Minister Sergei Shoigu said Moscow’s forces hold nearly all of Luhansk province. And it appears that Russia now occupies roughly half of Donetsk province, according to Ukrainian officials and military analysts.

Syria is a strong ally of Russia, which joined Syria’s conflict in September 2015 helping tip the balance of power in favor of Assad’s favor.

It added that contacts are ongoing with both regions “to strengthen relations including setting up diplomatic relations.”

After abandoning its bungled attempt to storm Ukraine’ capital of Kyiv two months ago, Russia declared that taking the entire Donbas is its main objective. Moscow-backed separatists have been battling Ukrainian government forces in the Donbas since 2014, and the region has borne the brunt of the Russian onslaught in recent weeks. 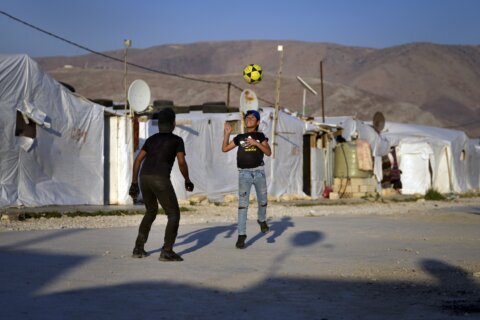