The Saudi-led coalition fighting in Yemen announced last week that it would release 163 prisoners to its rivals — the Iran-backed Houthi rebels — in support of a cease-fire agreement between the warring sides. The agreement, brokered by the United Nations, aims to pave the way to an end of Yemen’s 8-year civil war.

The Houthis however, denied that most were war detainees. In a statement the rebels’ prisoner affairs body said that only five of the group were prisoners of war. Among the returned were Yemeni fishermen and nine foreigners of African nationalities who had no affiliation with the Houthis, it added.

Abdel Malak al-Ajery, a member of the Houthi body known as the National Delegation, tweeted that the men who were returned were Yemeni laborers who were arrested while working in Saudi. He did not offer any evidence to back up his claim.

The International Committee of the Red Cross, which facilitated the repatriation, said in a statement that it had interviewed the detainees before they traveled to verify their identities and confirm that their wish was to return to Yemen.

It was unclear how the prisoners would make their way from Aden back home, to rebel-held north Yemen. Aden, in the country’s south, is controlled by Yemen’s internationally recognized government.

“We are pleased to see that humanitarian considerations are being prioritized for the sake of the families,” said Katharina Ritz, head of the ICRC delegation in Yemen, said in a statement.

Videos aired on the Saudi-owned Al-Arabiya news channel showed men dressed in white robes getting off a Red Cross airplane and holding flowers inside the Aden airport.

The truce, which went into effect on April 2, is the first nationwide cease-fire in Yemen in six years. It came amid concerted international and regional efforts to find a settlement to a conflict that has devastated the Arab world’s poorest country and pushed it to the brink of famine.

But the full agreement has yet to be implemented. In late April, the warring sides failed to operate the first commercial flight in six years from the rebel-held capital of Sanaa as agreed under the truce. Houthi and coalition authorities have reported almost daily violations of the cease-fire, especially around the government-held central city of Marib, which the Houthis have attempted to seize for over a year.

The U.N. envoy to Yemen, Hans Grundberg, welcomed Friday’s release of Houthi detainees by the Saudi-led coalition, as well as earlier detainee releases by the Houthis. However, he also called on both sides to make plans for a larger prisoner exchange stipulated under the cease-fire agreement.

Yemen’s conflicted erupted in 2014, when the Iranian-backed Houthis seized Sanaa, and forced the government into exile. The Saudi-led coalition entered the war in early 2015 to try restore the government to power.

The conflict has in recent years become a regional proxy war that has killed more than 150,000 people, including over 14,500 civilians. It has also created one of the worst humanitarian crises in the world. 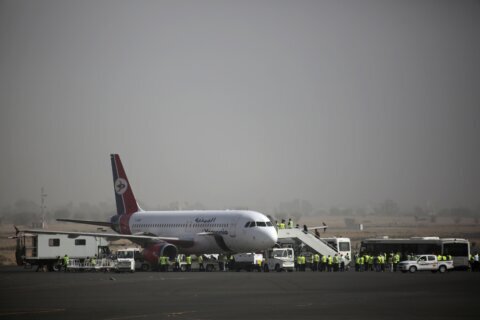