JERUSALEM (AP) — If, during your travels in the Holy Land, you decide to take the next step with your…
Listen now to WTOP News WTOP.com | Alexa | Google Home | WTOP App | 103.5 FM

JERUSALEM (AP) — If, during your travels in the Holy Land, you decide to take the next step with your Palestinian sweetheart, you should notify the Israeli military within 30 days.

That’s what it says on page 30 of a new 97-page policy released by COGAT, the Israeli military body in charge of civilian affairs in the occupied West Bank. The policy, set to take effect later this year, specifies that the “start of the relationship” is the engagement, the wedding or when you move in together.

The wide-ranging policy imposes new restrictions on foreigners who marry Palestinians or who come to the West Bank to work, volunteer, study or teach, further extending Israel’s nearly 55-year military rule into nearly every corner of Palestinian life. The rules do not apply to people visiting Israel or the more than 130 Jewish settlements scattered across the West Bank.

“It’s outrageous that the Israeli military thinks it can micromanage Palestinian society to this extent, to decide who’s qualified to teach at a university, who is entitled to have foreign volunteers,” said Jessica Montell, director of the Israeli human rights group HaMoked.

Her group filed a legal petition with lengthy objections to the policy, leading Israeli authorities to delay its implementation from May 20 until early July.

The policy could also anger the United States, which has long refused to enter into a visa waiver program with Israel, in part because Israel treats Palestinian-Americans differently than other U.S. citizens. The State Department said it was studying the new procedures and “engaging with Israeli authorities to understand their applications.”

Israel captured the West Bank in the 1967 Mideast war, and Palestinians want it to form the main part of their future state. The new policy refers to the territory as Judea and Samaria, the biblical name favored by Israeli nationalists, including Prime Minister Naftali Bennett, who consider it the historical heartland of the Jewish people.

Palestinians from abroad who wish to visit the West Bank would have to list the names and ID numbers of family members — and say whether they themselves own property in the West Bank or stand to inherit any. Many fear that could pave the way for their land to be seized by settlers.

“It’s like you’re informing on your own family or friends that you visit. You could be giving information that would pave the way for Israel to steal your property,” said Ahmed Abofoul, an international lawyer with the Al-Haq human rights group.

The policy would limit the number of visiting professors to 100 and the number of students to 150. A visiting lecturer would need to convince an Israeli military official that she “contributes significantly to academic learning, to the Area’s economy, or to advancing regional cooperation and peace,” the policy says.

In 2020, 366 European students and faculty secured grants to study or teach in the West Bank through the EU’s Erasmus+ exchange program. More than 1,800 Israelis studied in Europe under the same program that year. The EU representative office in Jerusalem declined to comment on the new procedures.

COGAT said the quotas apply to teachers and students who want to stay longer than one semester and will be “re-evaluated from time to time.”

Nearly all foreigners, including those in the private sector, would be forced to leave after 27 months and then wait another nine months before re-applying for entry. They would be limited to a total of five years in the territory, making long-term employment virtually impossible. Volunteers approved by the Israeli military could come for 12 months, but would then have to wait another year before applying for re-entry.

Birzeit University, one of the main institutions of higher education in the West Bank, said the policy “puts Palestinian universities under siege and divests them of basic control over their academic decisions.”

The rules do not apply to Israeli institutions, including Ariel University, which is built in a sprawling settlement deep inside the West Bank.

For thousands of foreigners who have married Palestinians and started families in the West Bank, the policy threatens to further complicate an already precarious life in which they could be separated from their families at any time.

Israel, which controls the population registry, rarely approves residency applications submitted through the Palestinian Authority, which has limited self-rule in parts of the West Bank.

Under the new rules, most foreign spouses would only be able to enter the West Bank on visitor permits valid for three to six months. Then they would have to leave for six months — no matter if they have jobs or children in school. A small number may qualify for spousal permits renewable for up to 27 months.

California-born Morgan Cooper has been navigating the system for nearly 20 years, first as a teacher at Birzeit and then as the wife of a Palestinian and the mother of their two children. She applied for residency five and a half years ago, after her first child was born. But the application is still pending and she still relies on temporary visas approved by Israel’s military to remain with her family.

Travel is never easy — she can recount story after story of permit delays, last-minute flight changes and being stranded in Jordan — and her return is never guaranteed.

“You normalize occupation,” Cooper said, because if you don’t, “it will overwhelm your mind with how unjust and absurd and cruel it is.”

“This machine that is Israeli occupation is constantly shifting the way it works, and those rules are rarely published to us, and they’re never clear.”

On several occasions, Israeli border officers have suggested that she and her family, all of whom have American citizenship, simply move to the United States. Palestinians say that’s the whole purpose of these rules — to force them out.

Even under the current system, Cooper could be deported and barred from returning at any time — for overstaying her visa, for alleged security violations, or at the discretion of COGAT.

“When I travel out, I leave my home as if I’m not ever coming back, as if I can call somebody and say here’s where I put my valuables,” she said. “Here’s my valuable papers, here’s jewelry I want, and please send me my aunt’s hand-made quilt. It’s all together.” 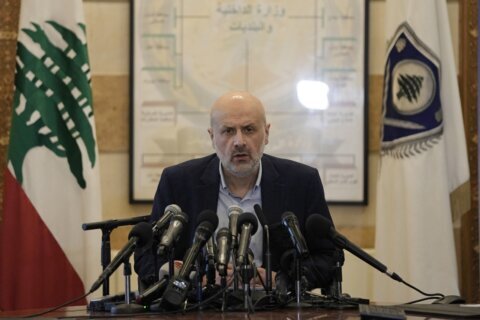