The strike disrupted the city’s two major north-south routes and brought traffic to a standstill at many bus stations in the sprawling metropolis of some 10 million, the Sharq daily reported. The protest altered routines across Tehran as commuters resorted to the subway, compounding overcrowding and confusion at some stations.

The bus drivers’ syndicate circulated footage of the strike on social media, showing drivers chanting for the mayor’s resignation and demanding a 10% raise. The union also has criticized the Intelligence Ministry for detaining one of its members last week.

Police were deploying hundreds of buses to offer alternative transportation to bus passengers affected by the strike, the semiofficial ISNA news agency reported. Officers were out in force at major thoroughfares and intersections across Tehran throughout the day.

Monday’s strike follows weeks of similar actions by teachers in cities across Iran. They have walked out of their classes to press for better pay and working conditions — demonstrations that have gained traction as Iran’s currency, the rial, shrivels in value and inflation surges.

In response, security forces arrested six people in connection with the teachers’ rallies in the southwestern city of Yasuj, the state-run IRIB news agency reported on Monday. The Intelligence Ministry has also detained two French citizens, identified by the French government as a prominent teachers’ union official and her partner on vacation in Iran, for allegedly causing “chaos.”

Anger over Iran’s worsening economic conditions has mounted amid price hikes of dinner table staples as a result of a new government policy to amend the food subsidy system. Scattered protests have erupted over the price changes in several provinces, with Iranian state-run media acknowledging nearly two dozen arrests. 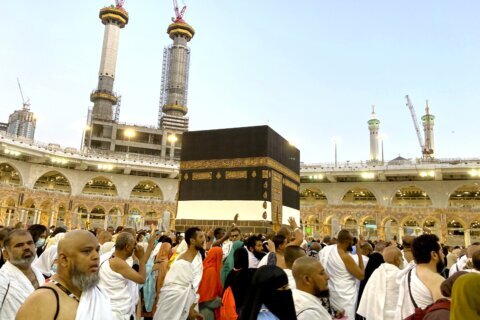