CAIRO (AP) — The new head of Yemen’s internationally recognized government said on Friday that the council he was chosen to lead will work to end the country’s grinding, eight-year civil war.

In his first televised address, Rashad al-Alimi thanked his government’s backers —Saudi Arabia and the United Arab Emirates — which have been helping Yemeni government forces fight the Iran-backed Houthi rebels for years.

Al-Alimi’s speech comes as both sides trade accusations of breaking the week-old internationally brokered cease-fire that was ushered in at the start of the Islamic holy month of Ramadan. The truce is supposed to last two months but many similar efforts in Yemen’s conflict have floundered in the past.

On Thursday, Yemen’s exiled president Abed Rabbo Mansour Hadi stepped aside in a move likely orchestrated in Riyadh, and transferred his powers to the presidential council lead by al-Alimi.

The country’s new head of government made no mention of any compromise with the Houthis. He thanked the U.N. and U.S. envoys to Yemen for their efforts but also praised all who attempted to “take back the country and its institutions.”

On Friday, both sides said they had documented some 80 violations of the cease-fire in just the past day, in reports published on their official media. The United Nations’ envoy to Yemen Hans Grundberg on Wednesday expressed concerns about reports of violations of the truce.

Yemen’s brutal civil war erupted in 2014, when the Houthis seized the capital of Sanaa and forced the government into exile. A Saudi-led coalition, including the United Arab Emirates, entered the war in early 2015 to try restore the government to power.

The conflict has in recent years become a regional proxy war that has killed more than 150,000 people, including over 14.500 civilians. It has also created one of the worst humanitarian crises in the world.

In his speech, al-Alimi expressly thanked the country’s armed forces, police and local militias for resisting the rebels. He referred to the Houthis as an “Iranian-project.”

Houthi media claimed most of the cease-fire violations over the past 24 hours were in the key rebel-held port city of Hodeida.

The Yemeni government said it had recorded violations on several fronts around the country, including the city of Marib, which the Houthis have been trying to capture for over a year. 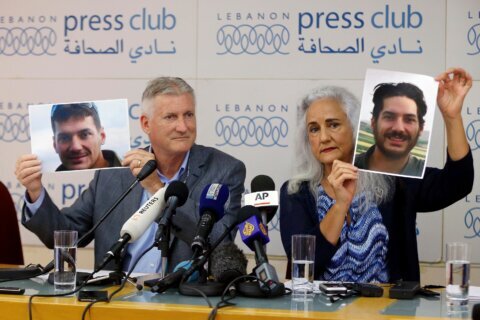