BEIRUT (AP) — Lebanon and the International Monetary Fund on Thursday reached a tentative agreement for comprehensive economic policies that could eventually pave the way for some relief for the crisis-hit country, after Beirut implements wide-ranging reforms.

The four-year agreement, which is subject to approval by IMF management and executive board, was announced by Lebanese Prime Minister Najib Mikati after a meeting with IMF delegates in Beirut. He said Lebanon promised the IMF that Beirut would implement the required reforms in the small Mediterranean nation notorious for corruption.

The tentative agreement — a first step on what is sure to be a long and complicated road — provides a glimmer of hope for Lebanon, which has long been in the grips of a devastating economic crisis. The World Bank has described the crisis as one of the worst the world has witnessed in more than 150 years.

The IMF said in a statement that Lebanese authorities and the IMF team that has been in Lebanon since March 28 reached “a staff-level agreement on comprehensive economic policies” that could be supported by a 46-month Extended Fund Arrangement, or EFF, with requested access of about $3 billion.

It is a first step on the way to an IMF bailout to Lebanon, potentially unlocking billions of dollars in loans. In order for that to happen, Lebanon would need to implement reforms, including drafting a capital control law, restructure the country’s had-hit banking sector and amend decades-old banking secrecy laws.

A statement released by President Michel Aoun’s office said he and Mikati are “committed to resolving the crisis and puting Lebanon back on the track of growth.”

The IMF said there are “five key pillars” that should be implemented, including restructuring the financial sector and implementing fiscal reforms, along with the proposed restructuring of external public debt. They also include reforming state-owned enterprises, particularly in the electricity sector, and strengthening governance, anti-corruption, and anti-money laundering efforts.

The IMF also called for establishing a credible and transparent monetary and exchange rate system as there are several exchange rates for the Lebanese pound. It said that there should be parliament approval of a reformed bank secrecy law to bring it in line with international standards to fight corruption.

The IMF statement said there would be an “externally assisted bank-by-bank evaluation for the 14 largest banks” in Lebanon. Since the meltdown began, local banks have imposed informal capital controls and there have been concerns that depositors will lose part of their savings.

“The crisis demands a comprehensive reform program,” Mikati said, in order to deal with challenges ahead and achieve “financial and economic stability and reach permanent and strong growth.”

Deputy Prime Minister Saadeh Shami, who is leading the talks with the IMF, said Lebanon’s economy contracted 60% since the meltdown began more than two years ago. He told the local LBCI TV that he hopes all the IMF “preconditions will be implemented quickly” and that the deal has the backing of Aoun, Mikati and also the powerful Hezbollah-allied Parliament Speaker Nabih Berri, who welcomed the agreement.

Lebanon defaulted in March 2020 on paying back its massive debt, worth at the time some $90 billion or 170% of GDP, making it one of the highest in the world.

Lebanon’s economic crisis that began in October 2019, rooted in decades of corruption and mismanagement, has left three-quarters of the population of 6 million people, including 1 million Syrian refugees, in poverty. The Lebanese pound has lost more than 90% of its value.

Talks between Lebanon and the IMF began in May 2020, then stopped for months amid a political deadlock in the country. They resumed after Mikati took office last September but no breakthrough had been made until Thursday’s agreement was reached. 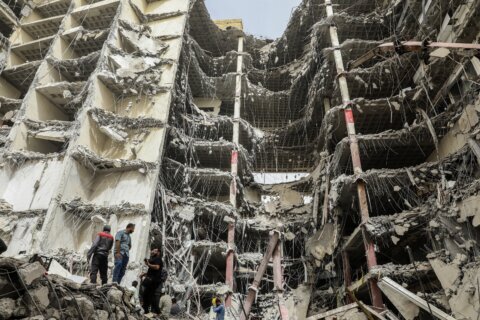