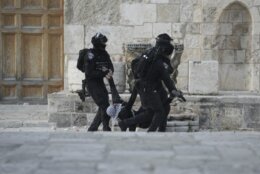 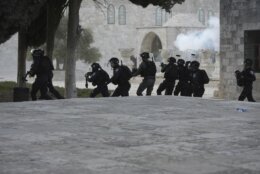 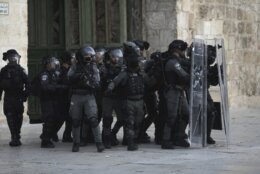 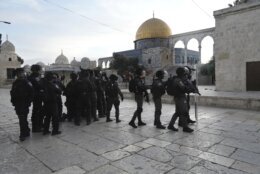 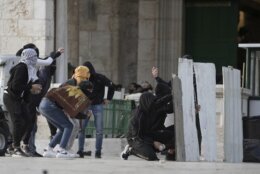 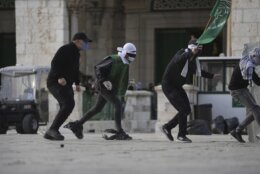 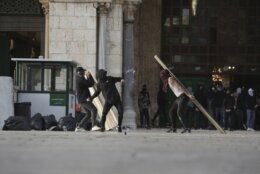 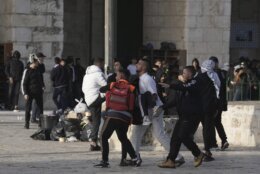 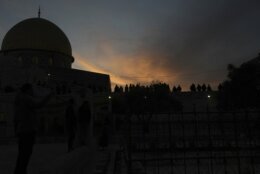 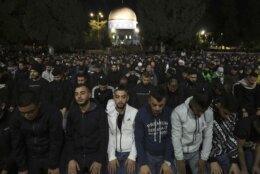 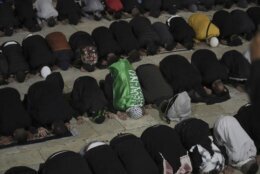 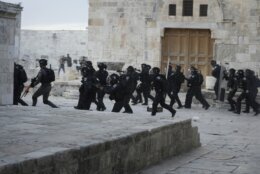 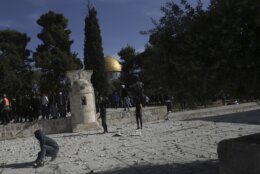 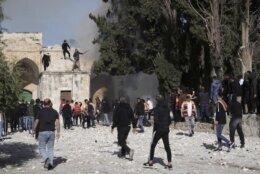 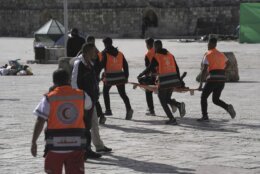 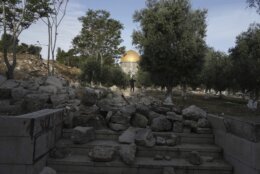 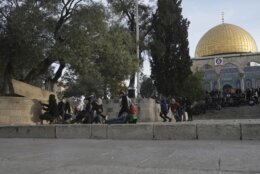 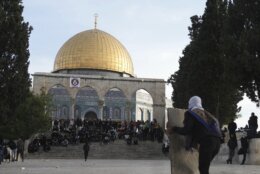 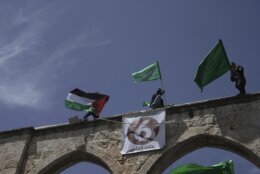 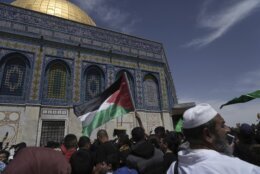 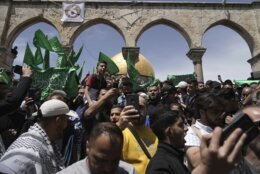 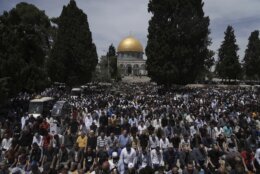 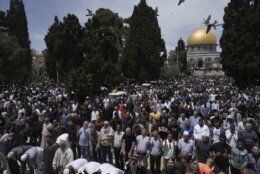 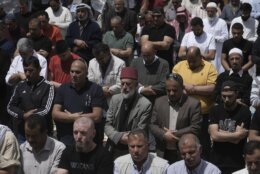 JERUSALEM (AP) — Israeli police in full riot gear stormed a sensitive Jerusalem holy site sacred to Jews and Muslims on Friday after Palestinian youths hurled stones at a gate where they were stationed.

The renewed violence at the site, which is sacred to Jews and Muslims, came despite Israel temporarily halting Jewish visits, which are seen by the Palestinians as a provocation. Medics said more than two dozen Palestinians were wounded before the clashes subsided hours later.

Friday evening, Israel said Palestinian militants in Gaza fired two rockets from the territory. One rocket landed in an open area in southern Israel and the other fell in Gaza. Palestinian media reported that two Gaza residents were injured from the rocket that landed short. There was no immediate comment from local health officials.

In Jerusalem, Tens of thousands of Muslims took part in the main Friday prayers at midday, which were held as planned.

Palestinians and Israeli police have regularly clashed at the site over the last week at a time of heightened tensions following a string of deadly attacks inside Israel and arrest raids in the occupied West Bank. Three rockets have been fired into Israel from the Gaza Strip, which is controlled by the Islamic militant group Hamas.

The string of events has raised fears of a repeat of last year, when protests and violence in Jerusalem eventually boiled over, helping to ignite an 11-day war between Israel and Hamas, and communal violence in Israel’s mixed cities.

Palestinian youths hurled stones toward police at a gate leading into the compound, according to two Palestinian witnesses who spoke on condition of anonymity out of security concerns. The police, in full riot gear, then entered the compound, firing rubber bullets and stun grenades.

Israeli police said the Palestinians, some carrying Hamas flags, had begun stockpiling stones and erecting crude fortifications before dawn. The police said that after the rock-throwing began, they waited until after early morning prayers had finished before entering the compound.

Video footage showed the police firing at a group of journalists holding cameras and loudly identifying themselves as members of the press. At least three Palestinian reporters were wounded by rubber bullets fired by police.

Some older Palestinians urged the youths to stop throwing rocks but were ignored, as dozens of young masked men hurled stones and fireworks at the police. A tree caught fire near the gate where the clashes began. Police said it was ignited by fireworks thrown by the Palestinians.

The Palestinian Red Crescent medical service said at least 31 Palestinians were wounded, including 14 who were taken to hospitals. A policewoman was hit in the face by a rock and taken for medical treatment, the police said.

The violence subsided later in the morning after another group of dozens of Palestinians said they wanted to clean the area ahead of the main weekly prayers midday. Those went ahead, with some 150,000 worshippers attending, according to the Islamic endowment that administers the site.

After prayers, a small group of Palestinians waving Hamas flags marched in protest and tried to break into an empty police post inside the compound. The police used a drone to drop tear gas on them, sending crowds of people scattering across the esplanade.

The Al-Aqsa Mosque in Jerusalem’s Old City is the third holiest site in Islam. The sprawling esplanade on which it is built is the holiest site for Jews, who refer to it as the Temple Mount because it was the location of two Jewish temples in antiquity. It lies at the heart of the Israeli-Palestinian conflict and clashes there have often ignited violence elsewhere.

Palestinians and neighboring Jordan, the custodian of the site, accuse Israel of violating longstanding arrangements by allowing increasingly large numbers of Jews to visit the site under police escort.

A longstanding prohibition on Jews praying at the site has eroded in recent years, fueling fears among Palestinians that Israel plans to take over the site or partition it.

Israel says it remains committed to the status quo and blames the violence on incitement by Hamas. It says its security forces are acting to remove rock-throwers in order to ensure freedom of worship for Jews and Muslims.

Visits by Jewish groups were halted beginning Friday for the last 10 days of the Muslim holy month of Ramadan, as they have been in the past.

This year, Ramadan coincided with the week-long Jewish Passover and major Christian holidays, with tens of thousands of people from all three faiths flocking to the Old City after the lifting of most coronavirus restrictions.

The Old City is in east Jerusalem, which Israel captured along with the West Bank and Gaza in the 1967 Mideast war. Israel annexed east Jerusalem in a move not recognized internationally and considers the entire city its capital. The Palestinians seek an independent state in all three territories and view east Jerusalem as their capital.

Israeli military ID’s gun that may have killed journalist