A tourist bus collided with a truck on a highway in southern Egypt and burst into flames on Wednesday, killing at least 10 people, including four French and a Belgian, authorities said.
Listen now to WTOP News WTOP.com | Alexa | Google Home | WTOP App | 103.5 FM
(1/3) 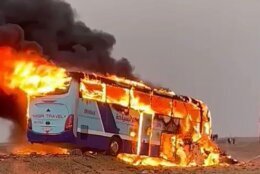 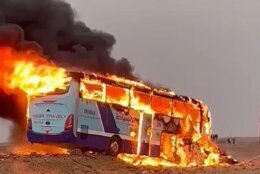 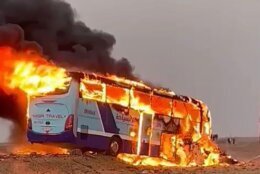 CAIRO (AP) — A tourist bus collided with a truck on a highway in southern Egypt and burst into flames on Wednesday, killing at least 10 people, including four French citizens and a Belgian national. Five Egyptians were also killed in the crash, authorities said.

At least 14 other passengers on the bus were injured in the crash, including eight from France and six from Belgium, the authorities said.

The five Egyptian fatalities included the bus driver, his assistant and a tour guide, along with two people who were in the truck, the public prosecutor’s office said in a statement. After the collision, the bus veered off the road and burst into flames. An investigation was underway to determine the cause of the crash.

Many bodies were charred, and the injured suffered from burns, bruises and fractures, according to a health official who spoke on condition of anonymity because he was not authorized to talk to the media.

President Abdel Fattah el-Sissi posted on Twitter that he was closely following the crash and had instructed the government to “provide all medical and treatment care for the victims of the tragic accident.”

The Health Ministry said 30 ambulances were sent to the scene and took the causalities to hospitals. Aswan Provincial Governor Ashraf Attia said the injured were in stable condition.

Footage that circulated online showed a tourist bus in flames with people trying to put out the fire. “A guest (tourist) is dying inside,” one person was heard screaming. The bus in the video bore the logo of state-owned Misr Travel. The Cairo-based agency did not respond to a request for comment.

An Associated Press video of the aftermath showed the wreckage of the bus by the roadside.

Wednesday’s accident came five days after a bus crashed on a highway near the Red Sea, killing three people, including two Polish tourists.

Deadly traffic accidents claim thousands of lives every year in Egypt, which has a poor transportation safety record. The crashes and collisions are mostly caused by speeding, bad roads or poor enforcement of traffic laws. 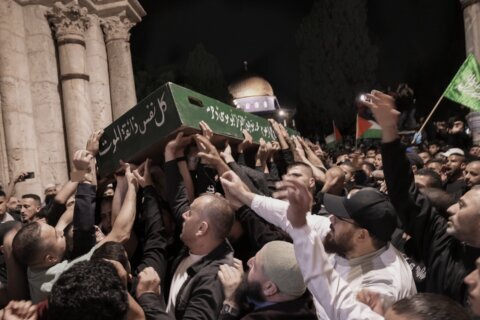