UN calls for probe into rape allegations in Sudan protests

CAIRO (AP) — The U.N. human rights office on Tuesday called for an independent investigation into allegations of sexual violence including rape and gang rape during mass anti-coup protests in Sudan earlier this week, a spokeswoman said.

Liz Throssell, a spokeswoman for the U.N. human rights office in Geneva, said they received “disturbing” reports alleging that 13 women and girls were raped or gang raped in the demonstrations on Sunday in the capital, Khartoum.

Tens of thousands of Sudanese took to the streets in Khartoum and elsewhere in Sudan on Sunday, marking the third anniversary of the uprising that forced the removal of autocrat Omar al-Bashir in April 2019.

The rallies turned violent in many places as security forces moved against the protesters. At least two people were killed and over 300 others were wounded, according the Sudan Doctors Committee, a professional medical union.

Women were reportedly sexually harassed while fleeing the area around the presidential palace in Khartoum when Sudanese forces fired tear gas and live ammunition there to disperse the protests, Throssell.

“We urge a prompt, independent and thorough investigation into the allegations of rape and sexual harassment, as well as the allegations of death and injury of protesters as a result of the unnecessary or disproportionate use of force, in particular use of live ammunition,” she said.

It was not the first time Sudanese security forces face accusations of sexual violence against female protesters.

On June 3, 2019, dozens of women were raped when forces tore apart a sit-in camp outside the military’s headquarters in Khartoum, according to the doctors committee and the testimonies of several of the women.

Sunday’s protests were one of the largest since the military took over on Oct. 25, removing Prime Minister Abdalla Hamdok’s transitional government in a coup that rattled the country’s fragile transition to democracy and led to relentless street demonstrations.

At least 46 people have been killed and hundreds wounded in protests triggered by the coup, according to a tally by the Sudanese medical group. Hamdok was reinstated last month amid international pressure in a deal that calls for an independent technocratic Cabinet under military oversight led by him.

However, Sudan’s pro-democracy movement rejects the deal and has vowed to continue street protests to pressure coup leaders to hand over power to a fully civilian government to lead the transition.

Later Tuesday, two government officials said Hamdok would step down soon due to the political deadlock hampering his efforts to form a Cabinet. They said political and military leaders were trying to persuade Hamdok not to resign, but he appeared determined “because all the parties can not find a common ground to move forward.”

There was no official announcement and the officials asked for anonymity to discuss the matter. 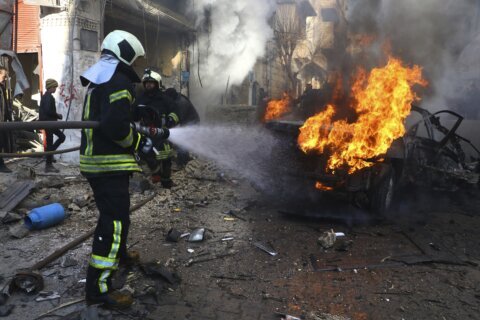