JERUSALEM (AP) — An Israeli military court on Wednesday handed down a reduced sentence to a Spanish woman who admitted in a plea bargain to raising funds for a West Bank charity that were diverted to a banned militant group, the Popular Front for the Liberation of Palestine.

Juana Ruiz Sánchez was sentenced to 13 months in prison and ordered to pay a fine of 50,000 shekels, or roughly $16,000. With credit for time already served, she could be released in the coming weeks.

Israel has tried to seize on the conviction as proof that it was justified in branding six Palestinian civil society organizations as terrorist groups last month — all due to alleged connections to the PFLP.

But Ruiz’s employer, the Health Work Committees, was not among those six groups. And in the plea bargain, she said she was unaware of the alleged fund-raising scheme and she was not implicated in any militant activities by the PFLP.

Her lawyer, Avigdor Feldman, said the plea bargain “clarified very clearly” that Ruiz was not involved in passing money to the PFLP and had no idea that the alleged transfers had taken place. He also accused Israeli officials of slandering his client and said he would demand that they take back statements implying she was a PFLP agent.

“The whole case is a political case. They tried to use it to justify the outlawing of the human rights organizations,” he told The Associated Press after the hearing at the Ofer military court in the occupied West Bank.

The PFLP is a secular, leftist political movement with an armed wing that has carried out deadly attacks against Israelis. Israel, the U.S. and European Union consider it to be a terrorist group.

Ruiz was a longtime worker for Health Work Committees, a Palestinian nonprofit group that provides medical services in the occupied West Bank.

Prosecutors say she raised hundreds of thousands of dollars for the group from foreign donors, an unspecified amount of which was then diverted to the PFLP. One accusation was that she she raised $4,000 for what she thought was medical equipment that was then steered to the PFLP. Few details on any other alleged misuse of funds were available.

Ruiz was quoted in the documents as saying she was unaware of any wrongdoing and “simply erred.”

But prosecutors noted she continued her work for the Health Work Committees even after learning a co-worker had helped finance an attack and after Israel declared the organization illegal in early 2020. In the end, she was convicted of “performing a service for an outlawed organization” and illegal money transfers into the West Bank.

Feldman said his client, who is in her 60s and has been imprisoned since her arrest in April, agreed to the watered-down charges to help close the case and get out of jail. He said he plans to appear before a parole board to seek a sentence reduction that could get her released in about two weeks.

Her daughter, Maria Rishmawi, said the family was eager to put the episode behind them. “We can’t wait to have her home,” she said.

Israeli officials, referring to Ruiz by her married name of Juana Rishmawi, have trumpeted the conviction as a victory in their war against the PFLP. Israel says the group raises funds from unwitting Western donors under the guise of humanitarian work.

Last month, Israel designated six Palestinian civil society organizations as terrorist groups, saying they were tied to the PFLP. It so far has not yet taken further action against the groups. But Wednesday’s plea bargain could serve as a template for future moves.

The six groups, some of which have close ties to rights groups in Israel and abroad, deny the allegations. They say the terror designation is aimed at muzzling critics of Israel’s half-century military occupation of territories the Palestinians want for their future state.

A confidential Israeli dossier detailing alleged links between the groups and the PFLP contains little concrete evidence and relies almost entirely on the interrogations of two former workers at the Health Works Committees.

Feldman, Ruiz’s lawyer, said Israel appears to be going after groups that have been working to press war crimes charges against Israel via the International Criminal Court in the Hague. The ICC has launched a preliminary investigation into Israeli practices in both the occupied West Bank and Gaza.

“This is part of an overall effort to outlaw any organization in the West Bank that is actually cooperating with international law in the Hague,” he said.

The Spanish government, which provided consular assistance to Ruiz during the trial, has said it has controls to prevent aid money from reaching militant groups. The foreign ministry declined comment on Wednesday’s sentencing. 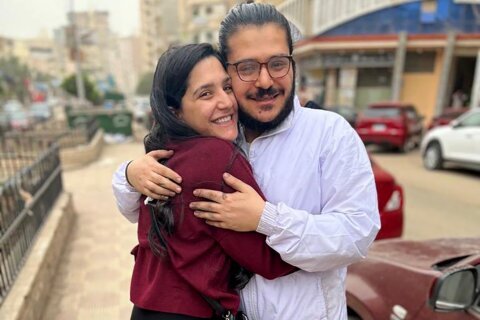