Najla Bouden Ramadhane, a professor at a prestigious engineering school, appears to be the first woman appointed as head of government in an Arab League nation. Sudan has a female foreign minister, and Lebanon’s defense minister is a woman.

Tunisian President Kais Saied named Bouden to the post in a surprise decision, and instructed her to create a new Cabinet as soon as possible, according to a statement from the president’s office.

Tunisia has been without a head of government and in limbo since Saied froze the country’s parliament and seized executive powers on July 25. The move notably sidelined the Islamist party that dominated parliament, Ennahdha, and critics denounced the president’s moves as a coup that threatens Tunisia’s young democracy.

Saied said he acted to save the country amid unrest over financial troubles and the government’s handling of the coronavirus pandemic.

It is unclear how much power Bouden will be able to yield due to the president’s actions. Last week, Saied issued presidential decrees bolstering his already near-total power and announced plans for a transitional government and new electoral rules.

The decrees include the continuing suspension of parliament’s powers, the suspension of lawmakers’ immunity from prosecution and a freeze on lawmakers’ salaries. The decrees also stated Saied’s intention to not send laws for parliamentary approval and to presidential decree alone, ignoring parts of the Tunisian Constitution.

His moves have raised concern among Islamists and pro-democracy forces in and beyond the Arab world. Tunisia, the birthplace of the Arab Spring uprisings a decade ago, was the only country to emerge from the tumultuous period with a newly designed democratic political system.

More than 100 Ennahdha officials announced their resignations Saturday to protest the choices of the party’s leadership in confronting the North African country’s political crisis.

Lawmaker Samir Dilou, a former government minister who resigned from Ennahdha, called Bouden’s appointment “illegal” because it was based on Saied’s presidential decrees.

In a message published on his Facebook page, Dilou said the new Cabinet would face “great challenges given the huge difficulties the country’s finance and economy are going through and its fragile sanitary situation” during the pandemic.

He wondered how the prime minister would be able to run the country “without having obtained the confidence of any parliamentary body.” 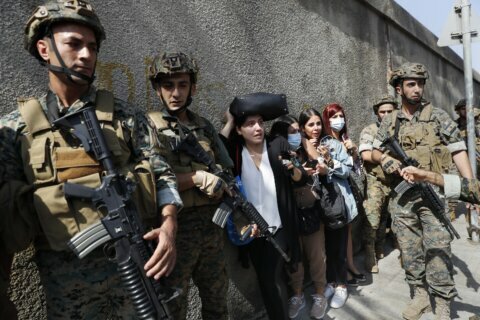