DAMASCUS, Syria (AP) — A breakaway Palestinian faction that carried out headline-grabbing attacks against Israel in the 1970s and 1980s has named a veteran new leader after its longtime founder died, the group said Sunday.

The Popular Front for the Liberation of Palestine-General Command said Talal Naji, was elected during a meeting in Damascus. He will replace Ahmed Jibril, who died on July 7 after being sick for months.

Naji was born in Nazareth in British-ruled Palestine in 1946. He studied in Syrian schools and joined the ranks of the Palestinian Liberation Front faction in 1962 before later joining the PFLP-GC.

Naji, who had lost an arm and an eye in a grenade explosion reportedly while training, had been the deputy chief of the PFLP-GC since 1973. He obtained a doctorate in political science from Moscow in 1984.

Khaled Jibril, the son of the late leader, was named as his deputy.

The PFLP-GC became known for dramatic attacks against Israel, including the hijacking an El Al jetliner in 1968 and the machine gunning of another airliner at Zurich airport in 1969. In 1970, it planted a bomb on a Swissair jet that blew up on a flight from Zurich to Tel Aviv, killing all 47 on aboard.

The Damascus-based group also carried out attacks against Israel from its bases in Lebanon.

During Israel’s invasion of Lebanon, the PFLP-GC captured three Israeli soldiers and negotiated their release in exchange for more than 1,100 mostly Palestinian, Lebanese and Syrian prisoners in 1985.

Among those released in the exchange was Kozo Okamoto, a member of the Japanese Red Army who took part in the 1972 shooting at Ben Gurion airport in Tel Aviv, Israel, that killed 24 people. Okamoto lives in Lebanon where he was granted political asylum decades ago.

One dramatic attack in 1987 was carried out by two of his fighters who crossed from Lebanon into Israel on hang-gliders and killed six Israeli soldiers. The attack was considered as one of the triggers for the first intifada.

The group is considered a terrorist organization by the United States and other Western countries. 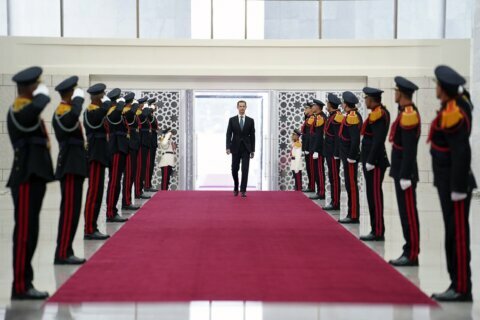