DUBAI, United Arab Emirates (AP) — The billionaire founder of one of Dubai’s largest developers, DAMAC Properties, announced on Wednesday his intention to take the company fully private by buying its publicly traded shares in a move that would delist it from the local stock exchange.

DAMAC is known in Dubai for a development that features a Trump-branded golf club surrounded by villas and apartments, making it the only one of its kind in the Middle East that bears the Trump logo. The company’s partnership with the Trump Organization to manage and run the golf course was struck before Donald Trump’s election as U.S. president. The golf club was inaugurated by Trump’s two sons in February 2017 when he was president.

The company, founded by Hussain Sajwani, also manages the DAMAC Towers, a high-rise development that includes luxury residences and the Hollywood-themed Paramount hotel and resort near the world’s tallest tower in Dubai. DAMAC also has projects in Qatar, Jordan, Saudi Arabia, Lebanon and the U.K.

When DAMAC went public in early 2015, Sajwani stood to profit greatly from the sale while retaining majority ownership. The company was valued then at around $3.8 billion.

Shares have since fallen and the company is now valued at $2.1 billion, making the buy back a much more affordable endeavor.

A notice filed by DAMAC to the Dubai Financial Market said Sajwani owns about 72% of the company through various investment firms. His offer to buy out minority shareholders is valued at approximately 2.19 billion dirhams, or what is $595 million.

The statement announced that Maple Invest Co., which is owned by Sajwani and registered in the British Virgin Islands, intends to acquire shares to reach at least 90% plus one ownership and then exercise its rights to acquire the remaining shares of any minority shareholders that do not accept the offer. The company would then be delisted off the Dubai exchange.

It was announced that Sajwani had tendered his resignation as chairman and board of director of DAMAC Properties due to conflicts of interest in the sale and purchase. The board of directors will appoint a new chairman who is an Emirati national, the statement said. A committee will review and assess the offer.

Last year, the company lost $283 million in earnings despite higher revenues that reached $1.28 billion. In 2019, the developer saw its first yearly loss since becoming publicly traded at $10 million off revenues of nearly $1.19 billion.

DAMAC’s losses reflect concerns of an oversupply of new properties on the market, which prompted Dubai’s leadership in 2019 to announce the creation of a committee to review new real estate projects before they come into the pipeline. The government is seeking to curb the pace of new construction projects as property prices fall and the sheer scale of developments threatens to outstrip demand. 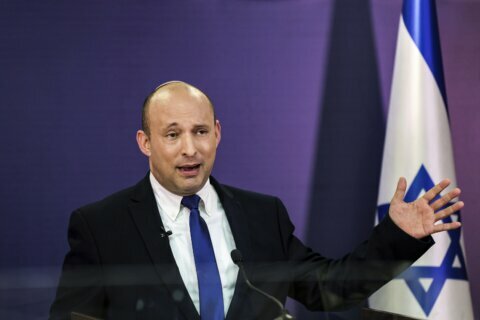 EXPLAINER: What will change under Israel’s new government?