Sporadic protests were reported throughout Lebanon on Saturday as the country’s 20-month economic crisis worsened. The World Bank described the crisis as one of the worst the world has witnessed in 150 years. It is coupled with a political deadlock that has left Lebanon without a government since August.

The largest protests were in the southern port city of Sidon and in Tripoli, Lebanon’s second largest city and most impoverished. Sporadic protests and road closures took place in the capital Beirut.

Lebanon has been suffering severe shortages of vital products including fuel, medicine and medical products, angering the public.

Lebanon’s currency hit a record low Saturday, reaching 18,000 pounds to the U.S. dollar. The pound has lost more than 90% of its value since the crisis began.

In October 2019 protesters called for the removal of the political class that has run the country since the end of the 1975-90 civil war and has been blamed for corruption and mismanagement that has ruined the country’s economy.

The army said rioters on motorcycles threw stun grenades at troops in Tripoli injuring nine soldiers, while another was injured when hit by a stone. Protesters attacked several state institutions in the city.

State-run National News Agency said Tripoli and other cities in Lebanon were quiet around noon Sunday.

The situation in Lebanon is not expected to improve as political bickering between President Michel Aoun and Prime Minister-designate Saad Hariri has delayed the formation of a government since Hariri was named to the post in October. Talks with the International Monetary Fund over the economic crisis have been suspended since last year.

Tens of thousands of people have lost their jobs since late 2019 in the tiny country of 6 million, including a million Syrian refugees. More than half the population lives in poverty. 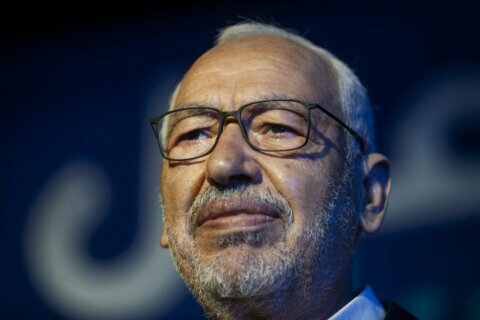