UN: Bodies of 10 Europe-bound migrants wash up in Libya

The bodies were found near the western Libyan towns of Zuwara and Garaboli, said Safa Msehli, a spokeswoman for the International Organization for Migration. They are believed to be migrants who drowned earlier this week while trying to reach Europe, she said.

A boat carrying over 65 migrants capsized off Libya on Monday, leaving at least two dozen presumed dead. That followed the death Sunday of five people, including a woman and a child, after their boat capsized.

The shipwrecks were the latest disasters in the Mediterranean Sea involving migrants seeking a better life in Europe. They came amid a spike in crossings and attempted crossings from Libya in recent weeks, with smugglers taking advantage of the calm sea and warm weather.

Libya has in recent years emerged as the dominant transit point for migrants fleeing war and poverty in Africa and the Middle East. The oil-rich country plunged into chaos following a NATO-backed uprising that toppled and killed longtime ruler Moammar Gadhafi in 2011.

In recent years, the European Union has partnered with Libya’s coast guard and other local groups to stem the dangerous Libya-Italy crossings. Rights groups, however, says those policies leave migrants at the mercy of armed groups in squalid detentions centers rife with abuses.

“They (bodies) all bear witness to the hardening policies and rising hostility towards people fleeing violence and extreme poverty,” said the spokeswoman. 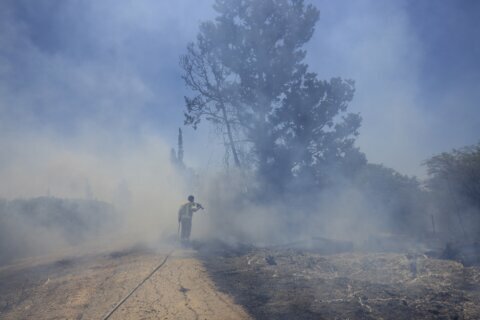