UNITED NATIONS — The U.N. Security Council is welcoming the cease-fire between Israel and Gaza’s Hamas rulers and calls for full adherence to the cessation of hostilities.

Saturday’s statement was approved by all 15 members of the council. It said the council “mourned the loss of civilian lives resulting from the violence” and “stressed the immediate need for humanitarian assistance to the Palestinian civilian population, particularly in Gaza.”

The statement further said it was urgent to restore calm and “reiterated the importance of achieving a comprehensive peace based on the vision of a region where two democratic states, Israel and Palestine, live side by side in peace with secure and recognized borders.”

Council members backed U.N. Secretary-General Antonio Guterres’ call for the international community to work with the United Nations in developing a “robust package of support for a swift, sustainable reconstruction and recovery.”

The council recognized the important role played by Egypt in achieving the cease-fire as well as other regional countries, the U.N., the Quartet of Mideast mediators — the U.N., U.S., European Union and Russia — and other international players.

The United States, Israel’s closest ally, had earlier blocked four proposed council statements calling for a cease-fire that all other members supported, saying it could interfere with Biden administration efforts to end the hostilities.

TEL AVIV, Israel — Thousands are rallying in the Israeli city of Tel Aviv, calling for coexistence between Jews and Arabs.

The demonstration on Saturday night was one of several held across Israel to call for peace between Israelis and Palestinians in the wake of 11 days of fighting in Gaza that ended with a cease-fire early on Friday.

Demonstrators marched through the city and later gathered in the central Habima Square to hear from politicians and artists.

Ayman Odeh, the leader of the main Arab party in parliament, called for a Palestinian state to be established alongside Israel. Odeh said: “There are two peoples here. Both deserve the right to self-determination.”

Israel had bombed the homes of senior Hamas figures during 11 days of fighting, as part of its attack on the group’s military infrastructure. The home of Sinwar was also attacked.

Sinwar was seen on Saturday as he paid his respects at a house of mourning for a Hamas commander killed in the war.

In the fighting, Israel had unleashed hundreds of airstrikes against militant targets in Gaza, while Hamas and other militants fired more than 4,000 rockets toward Israel.

GAZA CITY, Gaza Strip — A Palestinian official says an initial assessment shows at least 2,000 housing units were destroyed in the fighting between Israel and Palestinian militant groups in Gaza.

Naji Sarhan, deputy of Gaza’s works and housing ministry, tells The Associated Press on Saturday that more than 15,000 other units were partly destroyed in the 11-day war.

Israel launched hundreds of airstrikes on the overcrowded strip, targeting residential, commercial and government buildings. It said it was going after locations where Hamas had offices and resources.

Sarhan put the estimated financial losses from the fighting at $150 million. He says assessment is still ongoing.

GAZA CITY, Gaza Strip — The United Nations says approximately 800,000 people in Gaza do not have regular access to clean piped water, as nearly 50% of the water network was damaged in the recent fighting.

Quoting Gaza’s public works and housing ministry, the U.N. ’s office for the Coordination of Humanitarian Affairs said nearly 17,000 residential and commercial units have been damaged or destroyed in the 11-day campaign.

These include 769 housing and commercial units that have been rendered uninhabitable, at least 1,042 units in some 258 buildings which have been destroyed and another 14,538 units that have suffered minor damage.

The U.N. said 53 education facilities, six hospitals and 11 primary health care centers have been damaged since May 10. One health center was severely damaged, the U.N. said, while one hospital is not operational because of lack of electricity. Schools in Gaza remain closed, affecting almost 600,000 children.

CAIRO — An Egyptian diplomat says two teams of Egyptian mediators are in Israel and the Palestinian territories to continue talks on firming up a cease-fire deal — and securing a long-term calm.

The diplomat said Saturday discussions include implementing agreed-on measures in Gaza and Jerusalem, including ways to prevent practices that led to the latest fighting.

The official did not elaborate. He was apparently referring to violence at the Al-Aqsa Mosque and the planned eviction of Palestinian families from the Sheikh Jarrah neighborhood in east Jerusalem.

The diplomat spoke on condition of anonymity to discuss behind-the-scenes deliberations.

The diplomat also said Israel has given a green light to Gaza fishermen to return to sea Saturday as part of the cease-fire deal.

The Egyptian delegations arrived in Israel and the Palestinian territories Friday, according to Egypt’s official MENA news agency. The delegations met with Palestinian factions in Gaza directly after they arrived, MENA reported.

Hussein Sheikh, a senior aide to Palestinian President Mahmoud Abbas, tweeted that one of the Egyptian delegation planned to hold talks with the Palestinian leadership in Ramallah on Saturday.

A statement by Egypt’s Foreign Ministry said the two diplomats on Friday discussed shoring up the deal, which has mostly brought a halt to fighting between Israel and the Palestinians. They hope that will facilitate the reconstruction of Gaza.

The statement said the ministers also agreed on the importance of coordination between the two nations, the Palestinian Authority and international partners on securing communication channels to achieve peace. It did not provide further details.

The Egyptian government, meanwhile, said it would send a 130-truck convoy carrying humanitarian aid and medical supplies to Gaza, according the presidency.

The convoy is expected to enter the territory Saturday 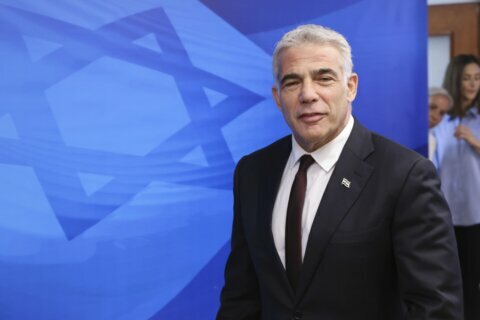 Israel says foreign minister will travel to the United Arab Emirates next week, first such visit by top Israeli diplomat