CAIRO (AP) — In a show of force, armed militiamen briefly took over a hotel in the Libyan capital of Tripoli that serves as headquarters for the interim government, officials said Saturday.

Friday’s development came after the three-member presidential council earlier this week appointed a new chief of the intelligence agency, Libya’s version of the CIA. The militias, which control Tripoli, were apparently unhappy with the choice of Hussein Khalifa as the new spy chief.

Presidential council spokeswoman Najwa Wheba said no one was hurt in the takeover of Hotel Corinthia, in the heart of Tripoli. The hotel was mostly empty on Friday, the Muslim weekend.

After a while, the militias left the hotel, according to an official at the Interior Ministry who spoke on condition of anonymity under regulations. Khalifa and the militia leaders were not immediately available for comment on Saturday.

The takeover underscored the tough road ahead for the interim government, which has been tasked with steering Libya through general elections due at the end of the year. The government has struggled to unite the conflict-stricken nation ahead of the vote.

Wheba said the presidential council has no permanent headquarters and that the hotel is one of the places where the council convenes. Videos circulating on social media show militiamen at the entrance of the hotel.

On Monday, Najla al-Manqoush, the foreign minister of Libya’s interim government called for the departure of all foreign forces and mercenaries, including Turkish troops, from the oil-rich North African country. That was seen as a rebuke to Turkey and angered pro-Turkey factions in western Libya.

U.N. Security Council diplomats say there are more than 20,000 foreign fighters and mercenaries in Libya, including Syrians, Sudanese, Chadians and Russians.

Libya was plunged into chaos when a NATO-backed uprising in 2011 toppled longtime ruler Moammar Gadhafi, who was later killed. The oil-rich country was in recent years split between rival east- and west-based administrations, each backed by different armed groups and foreign governments. 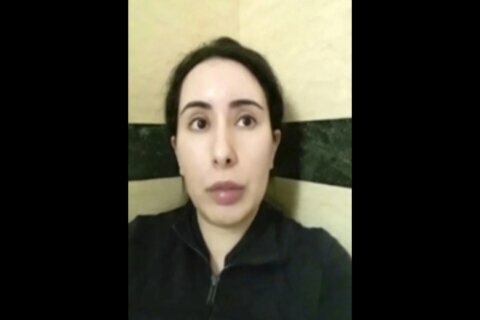