DUBAI, United Arab Emirates (AP) — A remotely piloted boat packed with explosives targeted the Saudi port of Yanbu in the Red Sea on Tuesday, the kingdom said, with the blast sending black smoke into the sky off the coast.

Saudi Arabia claimed to have intercepted and destroyed the attack boat. However, private security firms suggested commercial traffic near the port may have been hit in the assault.

Details remained scarce, but the incident comes after a series of attacks on shipping in the wider Mideast region amid a shadow war between Iran and Israel and against the backdrop of ongoing negotiations between Tehran and world powers over Iran’s tattered nuclear deal.

The incident also comes amid the kingdom’s yearslong war against Yemen’s Houthi rebels. The Houthis have in the past used bomb-laden drones and explosive-packed boats in attacks targeting the kingdom. However, the rebels did not immediately claim any assaults on Tuesday and did not respond to a request for comment.

“The booby-trapped boat was dealt and destroyed according to the rules of engagement,” the report quoted al-Maliki as saying, without providing evidence to support his claim.

The United Kingdom Maritime Trade Operations, run by the British navy, simply said it was “aware of reports of an incident” and that investigations were ongoing. Private maritime security firm Dryad Global said it had reports that a ship had been “attacked,” without elaborating.

British maritime security firm Ambrey reported an “incident” off western Saudi Arabia, between the ports of Yanbu and Rabigh. Earlier Tuesday morning, smoke was seen rising from a vessel off the Saudi oil-shipping port of of Yanbu, the firm said. Multiple tankers remain anchored or drifting in the area.

Yanbu port control broadcast a message by marine VHF radio, warning vessels to increase their level of alertness and monitor for any suspicious activity, Ambrey said.

The U.S. Navy’s Mideast-based 5th Fleet declined to immediately comment on the incident.

Yanbu, 870 kilometers (540 miles) west of Riyadh, serves as the end point of the kingdom’s crucial East-West Pipeline. It allows crude oil pumped in its eastern fields to be shipped directly via the Red Sea, avoiding the Persian Gulf’s chokepoint at the Strait of Hormuz. Yanbu is also home to an oil refinery that can process 400,000 barrels of crude per day.

In May 2019, then-U.S. National Security Adviser John Bolton claimed that Yanbu had been targeted in an attack never acknowledged by the kingdom.

Meanwhile, American and Iranian warships had a tense encounter in the Persian Gulf earlier this month, the first such incident in about a year, the U.S. Navy said Tuesday.

Footage released by the Navy showed a ship commanded by Iran’s paramilitary Revolutionary Guard cut in front of the USCGC Monomoy, causing the Coast Guard vessel to come to an abrupt stop with its engine smoking on April 2.

The Guard also did the same with another Coast Guard vessel, the USCGC Wrangell, said Cmdr. Rebecca Rebarich, a 5th Fleet spokeswoman. Such close passes risk the ships colliding at sea.

Iran did not immediately acknowledge the incident in the southern reaches of the Persian Gulf, which resulted in no injuries or damage.

“The U.S. crews issued multiple warnings via bridge-to-bridge radio, five short blasts from the ships’ horns, and while the (Iranian) Harth 55 responded to the bridge-to-bridge radio queries, they continued the unsafe maneuvers,” Rebarich said. “After approximately three hour of the U.S. issuing warning and conducting defensive maneuvers, the (Iranian) vessels maneuvered away from the U.S. ships and opened distance between them.”

The Wall Street Journal first reported on the incident, which involved the Iranian Harth support ship and three Iranian fast-attack craft. The Coast Guard units operate out of Bahrain as part of Patrol Forces Southwest Asia, its biggest unit overseas.

The interaction marked the first “unsafe and unprofessional” incident involving the Iranians since April 15, 2020, Rebarich said. However, Iran had largely stopped such incidents in 2018 and nearly in the entirety of 2019, she said.

The incidents at sea almost always involve the Revolutionary Guard, which reports only to Supreme Leader Ayatollah Ali Khamenei. Typically, they involve Iranian speedboats armed with deck-mounted machine guns and rocket launchers test-firing weapons or shadowing American aircraft carriers passing through the Strait of Hormuz, the narrow mouth of the Persian Gulf through which 20% of all oil passes.

Some analysts believe the incidents are meant in part to squeeze President Hassan Rouhani’s administration after the 2015 nuclear deal. They include a 2016 incident in which Iranian forces captured and held overnight 10 U.S. sailors who strayed into the Islamic Republic’s territorial waters.

“U.S. naval forces continue to remain vigilant and are trained to act in a professional manner, while our commanding officers retain the inherent right to act in self-defense,” Rebarich said.

The incident comes as Iran negotiates with world powers in Vienna over Tehran and Washington returning to the 2015 nuclear deal, talks due to resume Tuesday. It also follows a series of incidents across the Mideast attributed to a shadow war between Iran and Israel, which includes attacks on regional shipping and sabotage at Iran’s Natanz nuclear facility. 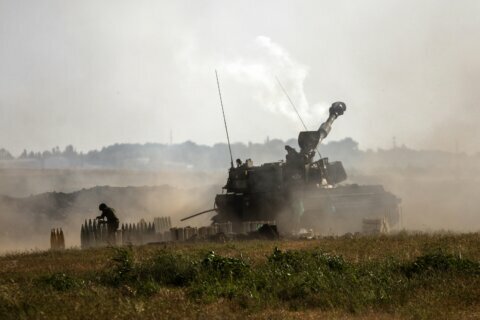 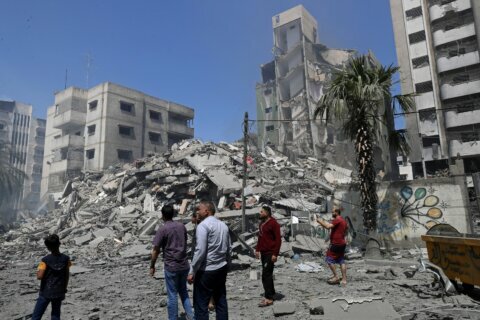 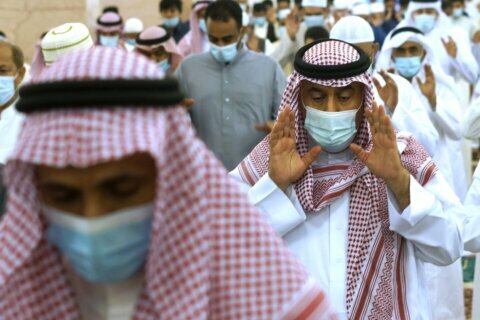