CAIRO (AP) — Forces in western Libya on Wednesday released more than 100 prisoners who had been captured while fighting under the banner of the country’s eastern-based commander, in a gesture of reconciliation following recent accords, officials said.

The fighters, troops of commander Khalifa Hifter, were freed in the coastal town of Zawiya in a televised ceremony attended by senior officials from the newly appointed transitional government.

Mohammad Younes Menfi, head of the presidential council, called the move a “significant step” toward a national reconciliation initiative launched by the council, after bitter years of fighting between rival governments in East and West.

Those released were seen wearing traditional white uniforms and caps at the ceremony in a soccer stadium, before rejoining their families.

Musa al-Koni, deputy head of the presidential council, called for the release of all of Libya’s war prisoners.

Hifter’s forces launched an offensive in April 2019 to try and capture Tripoli, but the campaign collapsed last June.

The warring sides reached a cease-fire deal in October that virtually ended the war and paved the road for U.N.-led political talks. Those talks then led to the appointment of an interim government in February, ahead of elections later this year.

Oil-rich Libya plunged into chaos after a 2011 NATO-backed uprising toppled and killed longtime dictator Moammar Gadhafi. The country for years has been divided between two governments, one in the east and another in the west, each backed by a vast array of militias as well as foreign powers. 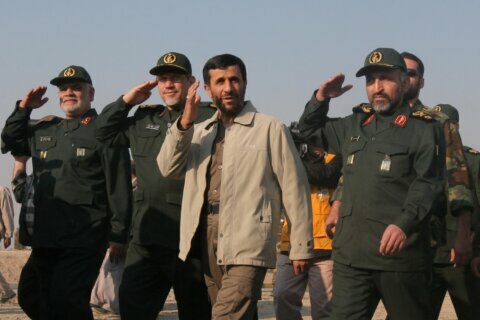