JISR AL-ZARQA, Israel (AP) — After weathering a year of the coronavirus pandemic, the fishermen of an Arab village in central Israel have been dealt another blow by a mysterious oil spill in the Mediterranean.

Grappling with its worst ecological disaster in years, the government this week ordered a precautionary ban on selling seafood.

Despite the ban, Jisr al-Zarqa’s fishermen went to sea Thursday to bring in their catch.

Sami Ali, a representative for the village’s fishermen, insisted it was safe to keep on fishing.

“The tar floats on the sea, on the water, it doesn’t penetrate deep. It does damage to the reefs, maybe also seaweed, the beach and many facilities. Also it damaged our equipment,” he said. “But the fish do not eat things that are not natural.”

Scientists disagree, and say it’s far too risky to keep fishing as they continue to analyze the disaster.

Over 90% of Israel’s 195 kilometer (120 mile) Mediterranean coastline was covered in an estimated 1,000 tons of black tar, the result of an oil spill out at sea earlier this month. The pollution has swept north to neighboring Lebanon and has caused extensive damage to the ecosystem, killing seabirds, endangered green sea turtles and other marine life.

The government has not yet identified who it believes is responsible for the spill, and has blocked publication of details of the investigation, saying doing so could jeopardize its efforts to bring those responsible to justice. The clean-up is expected to take months.

Authorities have banned people from visiting beaches because of the tar’s toxicity, and on Wednesday the Health Ministry issued a ban on the sale of all Mediterranean seafood until further notice.

The ministry said that although it had yet to receive evidence indicating a health risk, the ban was meant as a precautionary measure. It said fish were being tested to determine the level of pollution, and that it had notified fishermen and fishmongers of the ban.

Jisr al-Zarqa, an impoverished Arab village on Israel’s coast south of Haifa, is already feeling the pains of the coronavirus pandemic’s economic fallout. The community is one of Israel’s poorest and has long protested what it considers discriminatory treatment by the Israeli government. Only half of the village’s fishermen, around 20 people, went to sea Thursday to bring in the morning catch in spite of the ban.

While Ali isn’t worried about pollution contaminating the fish, he is worried about how plunging sales this week have deepened the community’s financial struggles.

“We didn’t manage to sell much. Some of it we ate with our families,” Ali said.

Thousands of volunteers have taken up the task of cleaning the poisonous tar off Israel’s coast. But every day the sea belches up fresh batches.

“No one knows how much tar is out there, at the bottom of the sea or other places,” said Arik Rosenblum, director of EcoOcean, the organization leading the volunteer efforts.

Along with government authorities, EcoOcean has launched instruments into the sea that can detect the presence of oil and give researchers a better picture.

The oil spill’s impact on the coastal ecosystem has yet to be fully assessed, but is estimated to be enormous, said Noa Shenkar, a marine biologist from Tel Aviv University’s school of zoology.

“We have a very solid database of how it was before the oil spill,” she told The Associated Press. “But we have learned from oil spills in other places in the world that the damage to biodiversity is usually very significant, and for several years you can see the impact.”

The Environmental Protection Ministry says it received no prior warning of the oil spill from international agencies, and that it is doing its utmost to contend with the disaster. Environmental groups and scientists in Israel have charged that the ministry was slow to take action to prevent the petroleum from reaching Israel’s shoreline.

For fishermen like those in Jisr al-Zarqa, the oil spill’s impact will be long term.

“We have suffered the heaviest and most immediate blow,” Ali said, while complaining that polluting industries like offshore gas rigs have received “legitimacy in the seascape.”

“For us, the sea is not just a source of income, it’s our heritage,” he said. 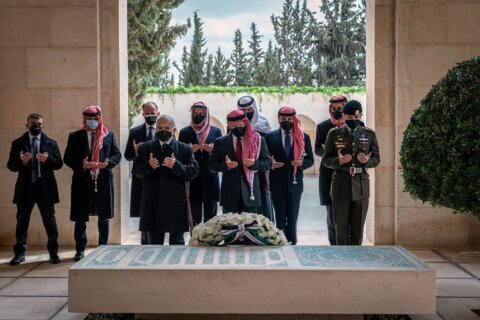